Accusations have been made on all sides after a Russian plane was shot down by Assad's forces, killing 15 Russian soldiers writes Asharq al-Awsat. 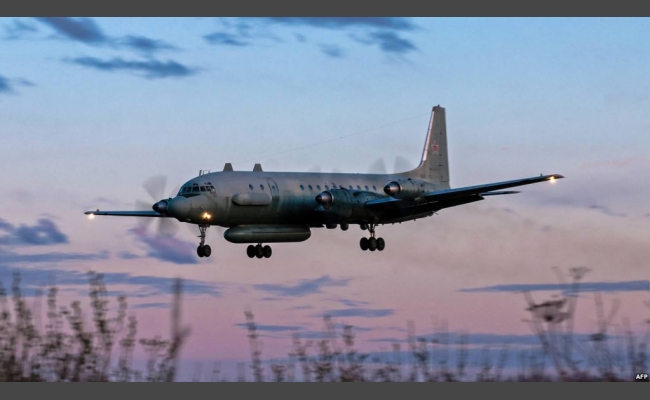 A Russian IL-20 aircraft crashed near Lattakia, and its crew of 15 were killed, after a rocket belonging to Assad regime forces hit the plane — an incident revealing the complex picture in Syria and an event blatantly showing how the Russian bear has stumbled into Syria’s traps.

At first, Syrian regime media trumpeted the ferocity of Syrian air defenses, with it later revealing that there had been an Israeli air raid, which targeted Iranian positions, or Assad forces giving services to Iranian networks, including Lebanon’s Hezbollah, which were red lines against which Israel has explicitly declared war.

The Russian explanation for the crash or downing of the Russian warplane was wonderfully odd, and avoided specifying the source of the crisis. The Russian Defense Ministry said that a Russian plane, which had disappeared near the Syrian coast with 15 members of the Russian armed forces on board, had been downed accidentally by a Syrian missile. The Russian statement said that this occurred because of “hostile and provocative actions” by Israeli warplanes in the area.

The Israeli fighters — and this is still the wise Russians speaking — forced the Russian aircraft into the path of the Syrian air defenses, and did not inform Moscow of its raids on the Syrian targets until a very short time before.

Israel rejected the Russian accusation, and placed all blame on the Syrian government and Syrian air defenses.

What is ironic is that Assad regime’s air defenses had been developed because of generous and frequent Russian support, according to The Guardian newspaper, which previously said that the Russian army had spent 18 months rebuilding Syrian air defense systems.

The Iranian military presence, both directly and through its foreign militias such as Hezbollah and the Iraqi and Afghan gangs, is unacceptable, according to the Israelis, and are legitimate targets for missiles and fighters. At the same time, the Russians and Iranians are the ones protecting the Syrian regime on the ground and in the sky and so — with apologies to his excellency, “President” Assad — how can Moscow solve this dilemma?

The fact is that a Russian plane was shot down by one of Assad’s missiles (originally taken from Russia). This is an alarm bell for the headstrong Russians that they are not solely in control of the situation in Syria.

It also reveals how toxic the Iranian presence in Syria is. The US Secretary of State, Mike Pompeo, has said — and he believed what he said — that the Russian plane being shot down “reminds us of the need to find permanent, peaceful, and political resolutions to the many overlapping conflicts in the region and the danger of tragic miscalculation in Syria’s crowded theater of operations.”

Apart from the gloomy news, the Russian response reminds me of a line from Adel Imam’s play, “The Witness Who Saw Nothing”, where he is complaining to Colonel Ahmed Abdel Salam about Shawish’s aggression against him: “He hit me on his face with my hand, sir!”