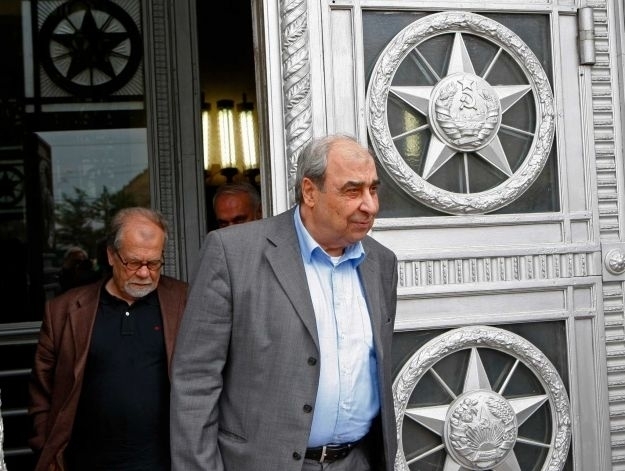 Al-Jazeera broadcast an interview on July 15thwith the political writer Michel Kilo, who represents the democratic pole (now called “Michel Kilo's mass”) in the Coalition. The interview was conducted by the famous TV presenter Tayseer Allouni, who returned to al-Jazeera after years in prison because of a charge relating to connections with al-Qaeda.

The interview came after a series of interviews Allouni made with leaders of Islamic battalions fighting in Syria. The basic question in all these interviews was what form the Syrian state might take in the future. There has only been one answer: an Islamic state.

The frequent interviews with leading Islamists are a testament to a movement that never existed before the outbreak of the Syrian revolution, which raised the slogan of freedom from the tyrannical regime. This media focus on the project of Islamists of “the Islamic caliphate” represents a clear absence of civil state representatives, the state that thousands of Syrians asked for during demonstrations, along with demands for freedom, dignity, and the replacement of a tyrannical regime with a democratic one. So it was necessary to talk with the “other opinion.” Surely, Mr. Michel Kilo was chosen as the most prominent representative of that movement. But the interview wasn’t what we expected, and his spontaneous, intellectual, and political speech (which distinguishes Mr. Kilo) raised many important, though sometimes bizarre, issues. But they were absolutely worthy of discussion.

After describing the condition of the Coalition, its relationship with other countries, and the regional interference in the Syrian opposition, Mr. Kilo explained to us the plan for the transitional period, consisting of many stages. The first is the fall of those who had chosen the security solution, those “who destroyed Syria, who are only 150 people.” Then comes the stage of eradicating the roots of tyranny in the state, society,” and hearts and minds.” This is established by a national unifying government, which should begin its work now. Its mission is to regain the Syrian national spirit and reconstruct the state’s institutions on a democratic basis in cooperation with the military institution. This is necessary because by refusing cooperation with the military, as mentioned in the political program of the National Council, we do something illogical, because the army is “the cornerstone of the regime.”

After many years, “three, five, or seven” according to Kilo, we can reach the stage of a democratic regime. And from hints scattered here and there in the interview, we should understand that the democratic stage is civil and recognizing equal citizenship. But in answering the frequent question in all Allouni’s interviews about the Islamic state, Michel Kilo accepted the rule of Islam.

I will not go through discussions about the condition of the Coalition and its subjugation to regional and international interference, especially after the regime's rejection of solutions suggested from inside Syria. But I agree with the description Kilo provided about the American attitude “which seeks to destroy Syria at the hands of Syrians and with Russian arms in order to complete the destruction of the eastern Arab region to preserve the domination of Israel.” But despite Kilo’s mastery in entering the interview by way of criticizing the Coalition’s condition, the process of its expansion that he outlined, and the interference of countries and ambassadors “to the degree of direct negotiations about the subject with them,” all of this cannot deny what is being said about the final formation of the Coalition that Kilo supported after the withdrawal of a dominating regional power.

Hence, all the talk about the Coalition can be summarized as a rejection of the lie that is Geneva and the regime’s rejection of it, simply because it seeks the replacement of the regime. The solution lies in the unity between the politician and the military, “the unifying politician at the top of the pyramid and the unifying, committed military base.”

All this inspires optimism but it also raises many serious questions about the Coalition's ability to carry out this great mission, especially after Kilo’s plainly critical words about the state of the Coalition, suffering from the regional and international interference that makes it ineffective.

But the point I want to emphasize is my complete rejection of what Mr. Kilo called the  “footstep of democracy” stage, which he suggests in order to escape speaking about the immediate transition to a democratic regime founded by a Constituent Assembly, a constitution, and free elections during the first year. This transitional government should be supervised by dignitaries who will not seek nominations for the first elections. The mission of these dignitaries will be the transition to a civil (non-military) and democratic state.

The important question is: why should we wait all these years under anamorphous regime based on national unity and the “eradication of tyranny?”Who will rule in these seven lean years “occupied with seeking democracy?”

Is the idea of national unity going to lead us to an ethnic and sectarian-based system in which all Syrian elements will be represented? Does this mean a Taef Syria? (the reference is to the Taef Agreement between fighting Lebanese which ended the Lebanese Civil War) While the Taef system established a transitional period after which sectarianism was meant to end, Lebanon ended up with a terrible sectarian system that keeps the country constantly on the edge of a civil war abyss.

Let us talk about the popular epic of Syrians’ wonderful lives through ages of Islamic rule, the epic that Kilo sang when he accepted Islam rule, “with one condition: the rule of Islam, not the rule of their whims.” Of course we mean the moderate Islam, the one that doesn’t expiate and divide. Such a rule succeeded in the past, so why won’t it work now?!

I will not discuss here what is called the Islamic state and which lasted for 1,400 years, nor of a history full of centuries of tyranny and the many examples it provides (completely different from what Kilo describes). But I believe, as a believer in democracy, that giving up the constants is something unacceptable, as Mr. Kilo agreed on many occasions that one of the important resolutions of the Cairo Conference was that the goal of the Syrian revolution is the foundation of a democratic and state with equal citizenship, “regardless of ethnicity, religion, or gender.”Thus, what is called “Islam rule” differs completely from a civil state with equal citizenship. It is immediately mysterious because it means that some people will rule in the name of religion, and this is unacceptable because these people will take advantage of religion to impose divine tyranny, the disastrous examples of which are still present. If the intention was to accept Islamists as a political authority, it should occur after adopting a civil constitution that will provide a mechanism for choosing people through election ballots, and thus authorize governing through a systematized political program. And if an Islamist party succeeded through this system, let it rule according to the authorization period the people gave it, a rule that could be ended by the same mechanism. But if an Islamist party imposed a system that negates the democracy that brought it to rule, by using Islam and Sharia (Islamic law), then it will take us into a divine tyranny. This would be worse than the current tyranny against which the people have rebelled by asking for freedom.

We should mention here that in the beginning of the revolution, Islamists (represented by Muslim Brotherhood) issued “a covenant document” in which they accepted the civil, democratic, and pluralistic state. This was to reassure the West and to satisfy the most powerful movement of people, who were demonstrating peacefully asking for freedom and the replacement of the tyrannical regime with a democratic one. Things are quite the opposite today, according to the changes on the ground, so the representative of the democratic movement accepts the Islamist state.

Mr. Kilo declares this to Tayseer Allouni after Allouni's interviews with the leaders of the Islamic battalions. There was only one purpose of these interviews (in my opinion): advertising that the Islamic state is the goal for all of the fighting battalions. To complete the modern “Siff in Arbitration”(the reference here is to the famous historical arbitration between the followers of Ali and the followers of Muawiyah, or the Sunni and Shia movements. The ring is part of the arbitration story), Mr. Kilo gives up the non-negotiable democratic state as if it was the ring in the story, so Islamists will secure the acceptance of the Islamic state as if securing the ring.

Thus, after all the sacrifices of Syrians, their “democratic representative” in the Coalition promises them that after the fall of the regime they will have seven years of “democratic footsteps.” Seven years of an ambiguous mechanism. To unify and agree, but how, if not through sectarian power sharing, which really is the ugliest system possible, as we can see in Lebanon and Iraq. It is true that Mr. Kilo didn’t mention this directly, but there is no other interpretation for this mysterious period of a national, unifying, and consensual government. If there is any other interpretation, I wish him to explain it clearly and without obscuring the idea with great words about national unity, agreement, and the return of politics to society, among other things.

I have been noticing for a while that the representatives of the opposition have been avoiding the direct and daring suggestion of a civil and democratic state, a state that guarantees equal citizenship with a law modified to be just, a separation of powers, total independence of the judiciary, and complete freedom of speech and freedom to form parties. There should be an agreement on the transitional period based on the election of a constituent assembly which should establish a modern constitution guaranteeing the main goal of the Syrian revolution: freedom for equal citizens. Then, there should be free parliamentary elections—he who succeeds rules and he who loses serves in opposition parties—and politics will return to society through these democratic practices. The majority and the minority will be political in nature, and not religious, sectarian, or ethnic. All this should be done in one year. As for the other missions that Mr. Kilo assigned to the national unifying government for his long transitional stage, I think it would be better if they were carried out by an elected government with a strong opposition that observes and investigates.

Finally, I think it is not enough to talk about the greatness of the Syrian woman, since appreciating her doesn’t solve the problem of her absence from the Coalition, at least from the democratic movement. Dear representatives of the democratic movement, with all my love, I wish that the compass of the revolution will remain clear, and that any temporary alliance, however important it might be now, will not mislead us to the pitfalls of politics. Because these pitfalls will waste the sacrifices of thousands of martyrs, wounded, detainees, displaced, lost, exiled, and refugees. The war has destroyed the houses and infrastructure of a large part of our country that we love: Syria.