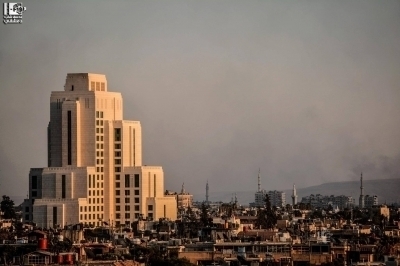 Friends of mine who just came from Damascus described how the city transformed into a ghost city, and how depressing it is to walk in its up-scaled residential areas such as Abu Rummaneh and Al-Malki, which have become dark and empty of their people even though these areas are always supplied with electricity in comparison to other deprived areas of Damascus, and are located in the heart of a major security area that includes Bashar al-Assad’s house, officials’ houses, some of the intelligence headquarters, and embassies.

What’s happening today in Damascus is unbelievable; the city has been exposed to major attempts to change its demographic nature according to loyalty standards to Al Assad regime, and its sectarian structure which is mainly made up of Sunni Muslims.

Damascus historically included a Christian area, a Jewish alley Haret al-Yahud, and another Shiite one inside the old city, but it was never religiously mixed as Sunni Muslims make up the vast majority of its people.

Other ethnic groups and nationalities that inhabited Damascus through historical migrations or waves of asylum, were all Sunni Muslims, such as the Kurds, Circassians, immigrants from Nablus and Jerusalem in Palestine, who founded Al Salihyia street thousands of years ago during the Crusader occupation of Jerusalem.

Soon Damascus embraced all these ethnicities and infused them into one society, upholding the values of love and loyalty to the city, and spreading the culture of coexistence and harmony despite ethnic sensitivities.

Exactly as Israel does in Jerusalem, lately, the Syrian regime has been changing Damascus identity by isolating it from its suburbs and from Daraa city, transforming it into settlements and preventing its original people from going back to it.

Damascus is under strict house arrest to show that everything is normal in it and that its people are satisfied with the current regime.

First, closing the doors of the city on holidays in the face of the original Damascenes to prevent opponents from sneaking into the city, then few weeks later, the regime forced out all the people who came from Damascus’s suburbs from the houses they inhabited or rented in the city despite being the main reason of their displacement by bombarding, shelling, and besieging their areas.

Living in Damascus has become a dream, with the new tenancy measurements and rules which the regime is imposing on people, like tenants of less than a year, and families who live with their relatives are destined to be displaced, and rent renewals should be attached with security approval that proves tenant’s loyalty to the regime.

In areas surrounding security branches in Damascus (Security Squares), regime forces as in Israel prevent owners from repairing anything inside their houses or changing their furniture without prior approval in addition to the inconvenience they face daily in regime’s checkpoints.

These restrictions are not in vein and intended to empty Damascus from its residents, or push them to travel and even their families or relatives are prohibited to live in their empty houses.

Once these houses are empty, regime’s shabiha mainly Alawites, occupy them using either false terrorism accusations especially for prominent opponents, or buy these houses after turning their owners’ lives to living hell and lastly by imposing a compulsory swap.

The Alawites work mostly in the intelligence, media, army, and airports, established their random (settlements) around Damascus in slums such as Mezza 86, Barza area, Al-Wuroud Street , and Qudsaya’s suburbs where most of the Damascus-based army and security officers along with their families live.

A group of senior officials lived in up-scaled neighborhoods of Al Maliki, Abu Rummaneh and Mazzeh, and the security environment in these neighborhoods is well guarded because it includes in addition to some security headquarters, embassies and the President's Palace.

Today, the expansion of sectarian presence in these up-scaled areas is the new plan, not to mention buying and selling operations carried out by companies bearing Gulf names, but some of those who spoke to us said the owners are Iranian businessmen allied with the ruling regime.

Not to mention the Iranian influence (Shiite), which could not despite all its attempts to spread Al Hussainiat to change the city's Arabic-Islamic identity with the authentic Christian presence in it.

Many of those who read these words will sense the danger tocsin the writer expressed in his article but those who know the true soul of Damascus, the mystery of its historical presence, will realize that all regime’s attempts are only to delay the fall of the capital by fortifying it with its supporters.

Damascus will only fall with an armed attack from the outside, based on a serious international resolution to arm FSA, when the bill of the regime’s survival becomes bigger than its fall, in the balance of opposing forces.

The scene of Hafez Al Assad’s death in June of 2000 was memorable to Damascenes, when most Alawites went back to their villages.

They left to the Syrian coast fearing their unknown destiny after Hafez’s death who did not have the courage to recommend to be buried in Damascus and that was during the strict security imposed on the city.

Will Damascus embrace his son Bashar who turned it to a waste land, destroyed its houses, mosques, and churches, and killed its children with chemicals weapons?