No wonder the Bashar Al-Assad government regarded Homs as its main—and for a while, sole—source of danger 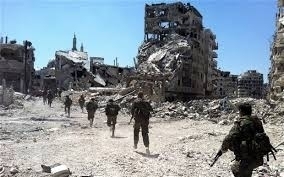 Now that Syrian government forces have entered Homs—the cradle of the Syrian revolution and a model of justice and freedom whose people have made supreme sacrifices for the sake of the Syrian uprising—some frank remarks must be made.

Over the past three and a half years, the population of Homs has spared no effort for the sake of all Syrians, doing everything in their power to help win the battle for freedom. Despite the losses and the suffering inflicted upon its people during the two-year siege, Homs never hesitated to shoulder the burden of the revolution. We should not forget that those who left Homs had stood out against Syrian government forces for two years, fighting under extremely harsh conditions from which many died of hunger or fled.

Many will say the regime has managed to crush the Homs rebels. Certainly, the Syrian government has for a long time been trying to enter Homs. But the city remained steadfast, driving the Damascus regime to despair. No wonder the Bashar Al-Assad government regarded Homs as its main—and for a while, sole—source of danger, laying siege to it before any other city, dropping tons of explosives and emptying the city of its people. While the number of rebel fighters has dwindled over time, the residents of Homs never hesitated in displaying their legendary heroism and bravery.

On the other hand, among the reasons that led to the rebel withdrawal from Homs are the divisions within the opposition itself, unpatriotic allegiances prevalent among its ranks, the personal considerations of rebel leaders, international and regional interference in the affairs of the revolution, and the opposition’s lack of plans to direct and protect the revolution against the government’s tricks. This is not to mention the lack of a unified, national army, fraying social solidarity, the participation of foreign fighters, the absence of organization, the failure to take clear positions towards the revolution on the part of the democratic opposition, and the apathy of large segments of Syria’s intelligentsia—who refrained from filling the political vacuum produced by the opposition’s partisan attitudes.

The role the opposition has played in the fall of Homs is not insignificant. Rather, it represented the other face of the Syrian regime. We have tolerated our mistakes for a period long enough to supersede all the acts of heroism Homs had demonstrated. If they truly want to keep territory, the rebels must learn the political and military lessons of what happened in Homs by building effective military bases and solid political structures to enable them to win the battle. The reason why victory has not yet been achieved is because the opposition have neglected the basics of success and waged battles among themselves.

What will happen after Homs? Will the rebels achieve victory with the right policies and through fostering national unity? Or will they be defeated as a result of chaos, political and military divisions, and the lack of an independent decision-making capacity?