the President of the Syrian Opposition Coalition says, the international community — led by the United States — must send Assad a clear message: Continued slaughter will not be tolerated, and a military victory is not possible 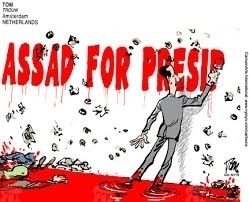 This week, dictator Bashar al-Assad will announce to the world his reelection as president of Syria. The election is a fraud, its outcome preordained. Dictators are not elected; they hold power by force and fear, the only motivations that Syrians have to show up for this charade.

Assad’s attempt to pretend — after bombing, starving and slaughtering his own people for more than three years — that he is holding a legally recognized election is intended to provide him and his tyrannical regime with a veneer of legitimacy, however false.

Secretary of State John Kerry termed it “cynical political theater.” Syrian democracy activists just call it Assad’s “blood elections.” It is revealing that the only powers attempting to validate this fakery are Russia and Iran, which are sending “observers” to oversee it.

Though the international community has largely condemned this “election” as a farce, Assad’s ploy will have significant consequences. It will contravene the U.N. communique agreed upon in Geneva, which calls for the establishment of a transitional governing body with full executive authority. It will provide Assad with a facade of legitimacy that he and his patrons in Moscow and Tehran will attempt to exploit on the world stage. And, most devastating, it will give Assad pretense to claim a mandate to accelerate the slaughter and destruction of the Syrian people.

But no matter how many more Syrians Assad succeeds in killing, his tanks, warplanes and rockets cannot destroy our revolution. The international community — led by the United States — must send Assad a clear message: Continued slaughter will not be tolerated, and a military victory is not possible.

Syria must have a political solution. But right now, Assad has no incentive to engage in such a process. The only way such a political solution can be achieved is with a change in the military balance of power significant enough to compel Assad to negotiate seriously a political transition as per the Geneva communique.

Some observers assert that the crisis in Syria cannot be solved and that Assad is there to stay. But neither the United States nor the Syrian people can afford to take such a defeatist perspective. The high price of disengagement would include conceding a haven from which al-Qaeda and the Iran-backed extremist organization Hezbollah could plan and launch attacks against the United States, Europe and the West’s Middle Eastern allies. The United States and the moderate Syrian opposition are in a common struggle to defeat enemies that seek to do us both harm.

Last month, I led a delegation of the diverse Syrian Opposition Coalition to Washington to advance our strategic partnership with the United States. Our message: Together, we can turn the tide. If our key international supporters, particularly the United States, work quickly to step up assistance to our forces on the ground, it will level the playing field and put the moderates of Syria in a position to negotiate a lasting political solution to the conflict.

The Syrian Opposition Coalition has a cabinet in waiting to govern temporarily as a constitution is written and a true democratic election can be carried out. Within Syria, we are establishing governance on the ground through a network of local councils, which are grass-roots bodies that are helping to establish a resurgent civil society after decades of Assad family rule that destroyed any organization it couldn’t control. The blueprint is there, and the Syrian opposition is ready.

During my trip to Washington, I was inspired by a visit to the Lincoln Memorial. The United States went through its own internal struggle but came out stronger. In the Gettysburg Address, Abraham Lincoln talked about a “new birth of freedom” that would “bring true equality” to all. These words have deep meaning for Syrians in our own struggle against tyranny and injustice. We, too, are resolved to ensure that our dead have not died in vain.

The road map to peace and a new Syria already exist. The steps needed to achieve political transition have been laid out in partnership with our allies. What’s needed now are tangible steps on the ground to create the conditions to implement a transitional governing body, starting in liberated territories. But that cannot happen without American leadership. And so we ask for your help as partners with common interests in security, stability and freedom in Syria and the broader region.