"Qalamoun will be a test for the region, as a battle for Qalamoun is widely considered a turning point that will determine the control for Damascus and the fate of the Assad regime" 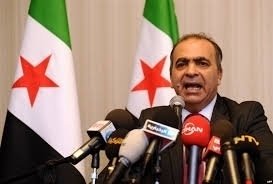 Signs of defeat were clear in the recent speeches of the regime’s battle commander, leader of the Iranian party in Lebanon, Hassan Nasrallah, and the speech of his assistant in Syria, Bashar al-Assad. This followed the advance of Syrian armed opposition forces in Idleb and Jisr al-Shughour in the north, and Daraa and Quneitra in the south, in addition to the regime's failure to advance in eastern Ghouta.

Can we consider the regime and its allies are experiencing their final defeat, and will the opposition’s advance last until the fall of the regime? How can the victory of the armed opposition become the first step to enable the Syrian people to fulfill their dream of a free and democratic Syrian state for all Syrians?

First, it is premature to speak of the regime's defeat as long as Tehran continues to support it with manpower from Iran, Lebanon, Iraq and Afghanistan. Syria’s national opposition is still incapable of cracking the regime from inside by working to attract loyal non-sectarian forces. These forces consist primarily of those who fear the alternative; those who do not support the regime but are also unable to support the forces that fight it.

It is well known that the recent opposition forces’ victories resulted from a regional decision to support this opposition and unify its forces. It is also known that the progress of this opposition depends on the continuation of this support. The battle that recently broke out in Qalamoun will be a test for this regional decision, as a battle for Qalamoun is widely considered a turning point that will determine the control for Damascus and, consequently, the fate of the regime. So will the regime continue its dominance over the fate of Syrians, or will it fall and end Iran’s domination of Syria and the region?

Surely, Iran and its Lebanese agent will not spare any effort or cost to win this battle and delay the fall of the regime, as long as they can use the Syrian card in the game to decide the fate of the region. Syria is the key to winning this game, either Iran will win the Qalamoun battle and regain its domination over the region, or Syria will return to its usual position as an essential part of Arab national security and regional stability.