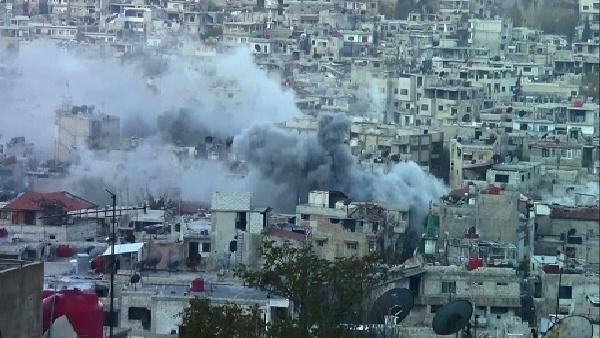 Amidst the summer heat and the dust of battles and massacres across Syria, the search for a diplomatic solution is intensifying in the region.

The Iranian nuclear deal with the West is felt in the Middle East and the renewed vigor in the search for conflict resolution is being interpreted as a result of the new deal.

However, the question of the departure of Syrian President Bashar al-Assad remains elusive to all parties.

Moscow, Tehran, Riyadh, and Geneva hosted many meetings between pro and anti-Assad groups searching to break the stalemate in Syria.

I believe the international community must not accept or entertain a demographic or land transfer and stop flirting with and reject proposals tabled by Western policy makers that it is time in the Middle East to do away with the Sykes Picot lines in the sand.

This furtive diplomatic search has overshadowed a new and alarming development, namely Zabadani and the battles to control the road between Damascus and Lebanon. Experts explain how the removal of opposition forces from the town and valley of Zabadani clears the way to establish an opposition free zone that extends along the Lebanese Syrian border. This of course comes with the help of Hezbollah militias fighting to clear opposition fighters and people from all of the Qalamoun mountain range zigzagging along Lebanon’s eastern border with Syria.

The Zabadani valley battles seem to be opening up a new chapter in the Syrian conflict.

It is an operation designed to remove anti-Assad inhabitants from the Zabadani valley and villages around it with the aim that opposition forces would then grant safe passage to forces loyal to Assad and the population of two enclaves of Fuaa and Kefraya in north Idleb province.

The swap would not be the first in conflicts around the world but its nature and who is playing the role of broker renders it interesting.

It is reported that Iranian officers discussed with opposition leaders a deal to move Syrians, mainly Sunnis, from a strategic town close to Damascus. The area also includes Barada and Buqqin, two villages rich in water which play a part in controlling water supplies to the capital Damascus.

Fuaa and Kefraya in northwestern Idleb are in an enclave inhabited by the Shiite Syrian minority loyal to the Assad regime.

The Iranian nuclear deal has focused all eyes in the West and the Middle East on the need to solve the problems in the region for any future dividends of the deal to start paying off.

But President Assad is part of the problem and not the solution. He was the one who unleashed violence against the popular uprising. It is Assad who is said to have released from prison hundreds of violent Islamist extremists.

It is Assad and his Iranian allies who seem to be designing the partitioning of Syria and the creation of sectarian enclaves, not the Syrian national opposition.

The international community failed to protect civilians during four years of aerial bombing by the regime not to mention the chemical and other internationally banned munitions used to kill Syrians.

In the short term, the decision to partition Syria could serve the interests of Iran and Russia and ensure their foothold on the Mediterranean through a mini Alawite state ruled by the Assad dynasty.

Such a state could strengthen bids made by Syrian Kurds to demand self-rule for a autonomous region regardless of the endgame arrived at with a United Syria or a carved up one.

Right wing Israelis would be another party keen on seeing minority statelets or enclaves pop up, based on religious and/or ethnic ground. This would justify calls made by Prime Minister Netanyahu’s Likud government for Israel to be recognized as a Jewish state.

In the short term, yes, dividing Syria could serve some interests of some parties for a short time. But I believe the international community must not accept or entertain a demographic or land transfer and stop flirting with and reject proposals tabled by Western policy makers that it is time in the Middle East to do away with the Sykes Picot lines in the sand drawn to carve the region up between France and Great Britain who defeated the Ottoman empire in the 20th century.

In Syria, like elsewhere in the Middle East region, the stakes are high and many are right to start thinking outside the box, but it would be self-defeating for society and states to fight ISIS after setting the stage for a division of communities and land swaps. This would be to play straight into ISIS’ hands and all the enemies of moderate people in this region.

Ridding Syria of Assad and ISIS will not succeed through land and people swaps in Zabadani or Kefraya or elsewhere.

Mohamed Chebarro is currently an Al Arabiya TV News program Editor. He is also an award winning journalist, roving war reporter and commentator. He covered most regional conflicts in the 90s for MBC news and later headed Al Arabiya’s bureau in Beirut and London.