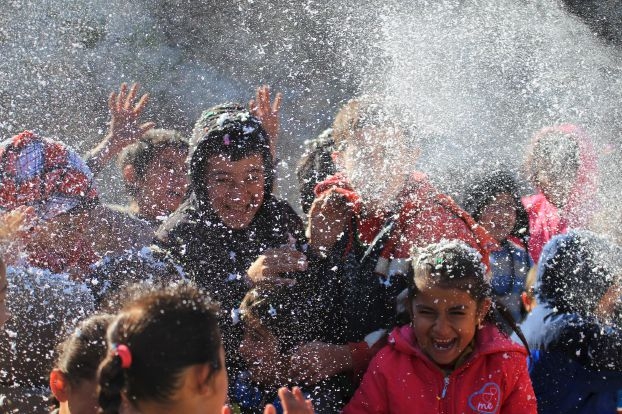 US officials have advised Syria’s political and military opposition to adopt “creative language” when discussing the fate of President Bashar al-Assad during the drafting of political proposals, which will be issued by more than 100 oppostion figures participating in the opposition’s expanded conference in Riyadh between December 8-10.

Undeclared international and regional communications continued Friday, involving foreign ministers from the US, Russia, Egypt, Jordan and many others, to provide a political umbrella for the success of the conference, as it attempts to reach a common position on the components of a Syrian transitional period and the formation of a delegation from moderate Syrian opposition blocs.

The high-level communications led to solving a number of complexities and an additional expansion of the list of invitees, where the Syrian National Coalition’s share of attendees rose to 38, including 22 members invited as representatives of the Coalition, while the others were invited as independents.

The number of invitees from the “Cairo Declaration” has been also expanded, adding Haytham Manna and Jihad Makdissi to Jamal Suleiman and Khaled Mahameed following talks between US Secretary of State John Kerry, his Egyptian counterpart Sameh Shoukry and a number of other foreign ministers from regional states. The chairman of the National Coordination Committee for Democratic Change, Hassan AbdulAzim, waited Friday for the final list of invitees after demands of raising the committee’s share of attendees from 11 to 21. Building the Syrian State Current’s leader, Louay Hussein, also issued demands for 10 more seats.

Invitations were also sent Friday to armed Islamist factions, including Ahrar ash-Sham and the Army of Islam, as well as Free Syrian Army factions in southern Syria in application of a political understanding between the US and regional countries on the exclusion these factions from the terrorist list, which so far only includes the Islamic State and Nusra Front.

As of yesterday evening, no invitations had been sent to either the Popular Front for Change and Liberation and its Moscow-based leader Qadri Jamil, or the Syrian Democratic Forum and its Paris-based leader Samir Aita, while the US’ attempts at pushing for an invitation to the Kurdish Democratic Union Party and its leader Saleh Muslim failed. It was reported yesterday that the Kurdish self-administration intends to hold a conference of the opposition factions in the Kurdish areas of northern Syria on Tuesday, amid procedural difficulties related to the arrival of leaders based in Iraqi Kurdistan or Turkey.

Officials in the two main opposition blocs are working on preparations for the conference. While the Executive Office of the Coordination Committee is working on a document on the mechanisms of negotiation principles, officials in the Coalition are developing a document of 13 items related to the basic principles of a settlement to be adopted as a reference for its negotiating position with other factions, in a quest to stop attempts to marginalize the role of the Coalition.

This document stipulates several points, including that the negotiations with the government delegation aim at implementing the Geneva statement, the formation of a transitional governing body that will become the only legitimate and legal body that represents the sovereignty of the state, in addition to "changing the current political regime drastically and comprehensively, including the head of the regime, its symbols and its security forces, and replacing it with a civil and democratic system based on the peaceful transition of power and political pluralism.”

It was learned that the Coalition and its allies intend to emphasize the reference of the political process in Syria is the Geneva statement which was issued on June 30, 2012, and was approved by the UN Security Council in resolution No. 2118, which stated that the political process must begin with the formation of a transitional governing body. According to these references: “The departure of President Bashar Assad is critical and no transition process is possible in light of his presence in power, either directly or indirectly. There is no doubt that the transitional phase cannot achieve its objectives with Assad in power. In actuality, Assad's presence contradicts the goal of the transition and distorts its content.”

This paragraph differs from the position of the Coordination Committee and other dissidents, especially because a number of conference invitees are travelling from Damascus. In addition, the Foreign Ministers of the countries of the International Syria Support Group have already agreed in their meetings to keep the fate of Assad aside, and instead will focus on the development of a road map of the transitional period and its timetable. This road map includes the formation of a “representative, non-sectarian government” to be formed after negotiations with the Assad regime in Geneva at the beginning of next year, to launch the transitional phase which includes a new constitution and elections after 18 months.

US officials have told opposition factions and figures to adopt a “creative language” when dealing with the fate of Assad in the reference document to be issued by the end of the conference, noting that Washington has also changed its position in the past four years from asking Assad to “step down”, stating that his departure is “not a precondition”, declaring Assad can not be part of a transitional phase, and finally the impossibility of Assad as "part of Syria's future". US special envoy for Syria, Michael Ratney, expressed a similar position during his talks with the leaders of the Coalition in Istanbul Friday.