Despite doctors’ continuous warnings to stay away from the video, the brutal and ugly content, I eventually dared to follow the envoy’s speech, to try to find a glimmer of hope or beam of light for the great Syrian people — or what remains of it 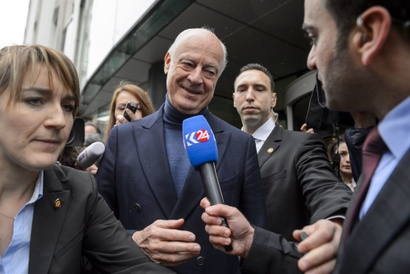 Syrian activists have launched a Facebook page to gather comments of the Syrian “people” addressed to Staffan de Mistura, the special envoy — and very special with respect to performance — of the United Nations in the Syrian affair. This initiative did not result from the consequences of the current negotiations and discussions about holding a meeting in Geneva between the Syrian regime and opposition, but expressed the “citizens’” reactions after the noted gentleman delivered a televised speech to the Syrian people. Subsequently, it became the right of those to whom the speech was delivered to give their opinion of it, and of the one who delivered it, of the institution of the one who delivered it, and of the international community covering what the one who delivered it commits, both negative and “positive.”

As the envoy addressed the downtrodden Syrian men and women, it was up to them to answer him with the “honor” and “hospitality” he deserves. However, to avoid this dishonorable position for one occupying a position of such importance — symbolically at least — he had to address the parties of the Syrian “conflict,” camouflaged in the convoluted style of his speech, to make simple people, like us, think that he is addressing the regime, and exempting the general, victimized public lying under fire, or the refugee in his epic alienation.

Despite doctors’ continuous warnings to stay away from the video clips, the brutal and ugly content and horrific results, I eventually dared to follow the envoy’s speech, to try to find a glimmer of hope or beam of light for the great Syrian people — or what remains of it. I even, with great naivety, hoped to hear something befitting the international diplomacy around Syria for five years: no taste, no smell, and a handful of the worry we are accustomed to ridiculing. In the end, there was none of this, but rather the form and content were more dispiriting than the slap of a shabeeha obstructing the path of a Syrian whose appearance doesn’t please him.

Despite the fact this television clip was accompanied by the necessary blue background, assuring that the United Nations has fulfilled what it could of its basic role, assigned in its founding charter, and connected with dreams of peace, the start of the clip with the expression, “Salaam aleikum,” immediately deducted 10 points. Resorting to this repugnant Orientalist style reminds us of the invaders, conquerors and occupiers, who thought, once, that if they uttered the language of the victims, it would bring them closer— especially after their bodies were bloodied by barrel bombs, and their voices choked by mustard and sarin gas. Someone, of sober mind and analysis, will offer a criticism of this categorization, and say it stops at the form and not the content. But as every message exposes its address, what follows in the envoy’s speech remains worse, as if it was not bad enough. It is, in the least estimate, a distortion of the facts, and not appropriate for a mission of mediation and intercession.

And so the envoy, after he integrates the concept of “negotiations” and “discussions” among the Syrians, and converses with the victimized people, asking their help in stopping the conflict, as if he considered these people (who once believed they would have the rights they peacefully demanded and were then subjected to a multi-national genocidal war) to have the ability to respond to this monologue. It was as if the envoy reproduced the television clip in which the regime “broadcaster” appears, addressing a dying and moaning woman and demanding that she point her fingers — and she may have lost all her extremities — in accusation at the “terrorists”. The envoy speaks of stability, peace, and dignity which the Syrians require, as if they bear responsibility for the stumbling possibility of talks which he is preparing to hold, he and his employees, with whomever attends alongside the regime representatives, from the security or Russian or Iranian or gelatinous opposition, whose members do not even represent their own, narrow families.

The observer’s blood pressure increases, and his heart rate accelerates, but he hopes for a phrase indicating, even a little, responsibility, even partially, for who caused the violence, and who possesses tremendous destructive power. However, the objective mirage soon swirls about with a commentary-igniting expression, as the envoy says people “don’t know where the shelling is coming from,” specifically rockets, so that the scene is blurred. Perhaps the envoy did not hear the barrel bombs, or the cluster or vacuum bombs, or perhaps he forgot, or pretends to forget, reading the reports of international human rights groups about the use of chemical weapons. He probably does not depend on the reports of UN employees, looking to make a living in the halls of Geneva or New York, and whose professionalism has reached the point of consulting Syrian government representatives and modifying the phrasing of their “humanitarian” reports, as shown, at last, by Foreign Policy magazine.

The envoy, who rushes to convince the Syrian opposition to join negotiations with the regime without implementing any of the articles of Security Council resolution 2254, about stopping the daily killing, breaking the sieges of populated areas, addressed the Syrians in closing by saying, “the United Nations will not abandon you, and will not disappoint you.” Everything that preceded his words, like the whole path of his mediation and achievements, and which this television speech faces, indicates just the opposite. We borrow two phrases and responses from the Orientalist Arabic of his speech, and we return them to his arena: “Khallas… kifaya” (That’s it… enough).