De Mistura must try and unite the opposition delegations if the Geneva talks are to be successful, and any future solution will require UN member states to stop funding terrorism and collaborate with the Syrian government, writes Samer Dahi for loyalist Al-Watan 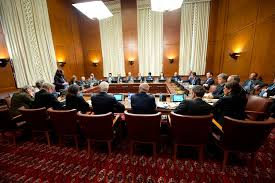 The Syrian talks to start today in Geneva hold out little hope of success as the negotiations enter their fourth round with a recurring problem of who will be facing the Syrian government at the negotiations table.

On the other hand, what happens outside these conference halls seems to be far more significant that what goes on inside. This round is different in the sense that the opposition has few cards to play in the negotiations, or, as some say, none at all. By now it has become well known that the results of any negotiations will be dictated by the strong.

The negotiations of Astana the capital of Kazakhstan are considered a double-edged sword that affected the Geneva course. On the one hand, Astana broke the deadlock that was going on in Geneva, and managed to get the Syrian government and the armed groups to sit together in one room. It also managed to somehow acknowledge that these armed groups are ultimately the ones who influence the decision-making process more than the opposition’s representative figures. In addition, the Russian, Iranian, and Turkish troika succeeded where Geneva had failed, effecting a ceasefire and pointing all guns at the two principal terrorist organizations in Syria, ISIS and Al-Nusra Front.

Still, Washington’s absence can have an adverse effect, especially in light of the American administration’s continued references to a "safe zone" in Syria and Russia’s efforts to moderate the term by arguing that the previous administration interpreted it differently. Meanwhile, Jordan's participation in Astana gives the hope that the rest will later participate.

In spite of the setbacks, the UN and De Mistura still retain the opportunity to push Geneva forward. They can demonstrate a genuine desire for finding a solution by pressing the three delegations to come together on a single front under unified leadership. This is especially important because even though the demands of Cairo and Moscow's delegations were more or less the same, the demands of Riyadh's delegation are certainly outdated.

The solution is not in unifying the opposition delegations. This is just the initial phase which needs to be followed by UN resolutions working in parallel with the negotiations among Syrians themselves. The UN members must commit to ceasing to fund terrorism in Syria. They also need to collaborate with the Syrian government, especially when the situation on the ground provides a flicker of hope that those goals may be achieved. Additionally, this gives the delegations of Geneva an opportunity to forge what could be considered the salvation route for Syrians, at a time when their suffering has gone beyond the possibility of endurance. This could also give Syrians the opportunity to write their own constitution and create their own political regime and future without the interference of the external forces.