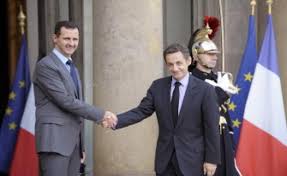 Successive developments point to a notable transformation in the international mood and a retraction of some Western powers from their previous positions, which were “extremist” in their opposition to the Syrian government. This repositioning coincides with the resurgence of right-wing movements globally.

The arrival of the Republican leader, Donald Trump, to the White House, the right-wingers’ success in pulling Britain out of the European Union, and the rising fortunes of their counterparts in attempts to grab the presidency of France have been accompanied by remindful statements from the capitals of these countries. They have moved away from harshly opposing Damascus to highlighting the importance of the role of Syria and its government in fighting terrorism, a phenomenon from which Europe has suffered from in the last two years.

Western delegations have also begun to turn toward the Syrian stage, especially after the notable victories achieved by the Syrian Arab army in Aleppo. The French have increased their visits to Syria, with a delegation of representatives from French civil associations, which stresses the need for cooperation with the Syrian army in fighting terrorism, currently visiting.

The more daring French position was stated by the far-right candidate for the French presidency, Marine Le Pen, who last week, with a view to culminating her electoral campaign, chose to visit Beirut as the Arab capital closest to Damascus, geographically and politically. During her many meetings with various political forces she emphasized the need to reorient the French position toward Damascus.

It is notable that Le Pen is not president of France and can repudiate her promises but as a candidate she must calculate every step of the way. It seems that she has read the French domestic mood carefully before choosing Beirut as her destination for a trip to make statements reflective of French public opinion today, in which full conviction was expressed that President Bashar al-Assad was now a “reassuring solution.”

What is certain is that Le Pen does not view reassuring Syrians or removing their pain as a priority over reassuring the French, who were struck by the terrorist group Islamic State (ISIS) in their capital. The blast that spilled the blood of hundreds of the French people served as a reminder that Damascus’ repeated warning of the terrorist threat extending to European capitals was real, if the international coalition figthing the group failed to coordinate with the regime’s allies in Russia, Iran and China.

A careful reading of the French position shows that Le Pen’s competitors must work on similar positions because “fighting terrorism” appears to be the most popular slogan to bring victory to those competing today for positions in Europe. Therefore, after restoring its relationships with Damascus, it is not hard to predict that, on one hand, France could take the lead in attempting to mend relations between Damascus and the European Union.

On the other hand, France could also extend the process of reconciliation between Damascus and European capitals, which are inundated with Syrian refugees. The French position could pave the way for a change in the mood of the Brussels-based union which is about to hold a first international conference in the coming days on the question of rebuilding Syria.

France faces two possibilities: Either it could pull back from its previous positions of tying the success of the conference and the achievement of what it calls a “political transition in Syria,” which means effectively delivering the reins of power in Syria to opposition figures, some of whom have been away from Syria for decades, or opt for the second possibility which revolves around changing the concept of the political transition as it is viewed by Damascus, whereby participation in power shall be between the current government and the opposition groups which have proven to be patriotic and firm in their renunciation of terrorism.