Writing for the Turkey-based outlet, Abou al-Khair al-Attar claims Israel benefits from prolonging the crisis in Syria largely at the expense of Ankara 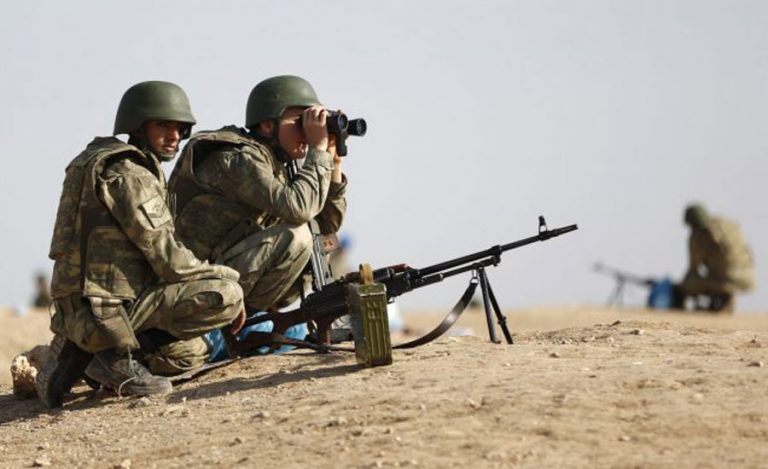 For a long time Israel has maintained its silence toward the Syrian revolution, despite the obviousness of its interests in the continuation of events. Since the first year of the revolution, a number of colonial projects have come to the fore, made clear through official positions, statements and alignments.

Regarding other countries, there is the American project, which carries with it the concerns, fears and ambitions of Israel, in addition to its own interests. Then there’s the Russian project with clear aims and causes, and the Iranian project, which is the clearest and oldest of the colonial projects on Syrian territory, having begun not during the revolution but preceding it by decades.

The Turkish project has forced the Turks to think based on facts, as Ankara is preoccupied with achieving its economic, administrative and political revival after having a dependent economy for no less than 100 years.

The aims of the Russians were apparent even before the revolution. After the collapse of the Soviet Union and the secession of a group of states which had been under its authority, Russia had less extension in terms of geography and resources, and its foreign influence receded. Its foreign trade became dependent on exporting weapons, oil and gas, and it needed to maintain its relations with Syria and the regime to defend its own interests. Moscow also needed a situation to exploit to return it to the forefront of international events from which it had departed, after it had begun to be treated like a developing country.

In addition, remaining in the Mediterranean Sea through the Tartous naval base was another aim of the Russians, and we should not forget their constant efforts to market their weapons. As a whole, conditions were fully in their favor, especially given that the United States was turning its back on international events in a break with the past. For that reason, Russia stuck with Syrian President Bashar al-Assad, through whom it was able to prepare conditions which were appropriate for it to achieve its ambitions. Moscow had what it wanted and so signed an agreement with Assad guaranteeing undreamt-of gains, including naval and air bases and oil and gas, in exchange for continuing to protect the president and his throne.

Although in theory the American project should only take into consideration Washington’s own interests, Israeli interests also lurk in all the details. Subsequently, it has a hidden role in what is happening in Syria, as it was the one that prevented the intervention in Syria and who permitted the regime’s planes to pursue rebels on the Golan border area, despite agreements preventing Syrian planes from flying in this area as well as the presence of heavy Syrian military equipment near the separation line. This behavior was clear evidence of Israel’s happiness at what was occurring on Syrian territory.

However, the clearest evidence emerged in 2013 after the ruling gang in Damascus bombed the Eastern Ghouta and Moadhamiyat al-Sham in the Western Ghouta with chemical weapons. The number of martyrs in this massacre exceeded 1,000, with thousands more injured. The White House at that time pulled back from carrying out a severe blow to the regime in response to the crossing of the red line, which former President Barack Obama had specified. The regime’s confusion was evident, and many of its officers and soldiers fled their stations.

Some of those fleeing headed toward Lebanon on their own and with money they stole, leaving Syria and its regime to its fate. When Israeli politician Ehud Barak paid a visit to the White House, Washington’s tone changed immediately to clearing the red lines and resolving the issue through a chemical weapons handover. With this, Israel achieved its two aims in one moment: Getting rid of the chemical weapons which had alarmed it, and maintaining the pace of killing of the Syrian people and the total destruction of Syria’s infrastructure. This is clear evidence that Israel is diligently following events and the pledge of the White House occupant, whoever it is, to protect the interests of the occupation state.

It is sufficient here to note what has recently occurred, whereby the Israeli Defense Ministry issued a statement in which it considered the Quneitra area and its surrounding hills a closed military zone, without protests from the Assad regime or any international body despite the fact that the territory specified by Israel is Syrian. This was enough to prevent Bashar’s regime from approaching this zone, even with a single soldier.

On this basis, we end with the conclusion that the American project is the Zionist project, but with another arm, and that the division projects being passed off under the name of de-escalation zones — or which in the future will be considered safe zones — are no more than a prelude to the partition of Syria into a number of statelets, which are Israeli aims being implemented by American and international hands.

Sharing a border of up to 850 km, the chaos in Syria is negatively affecting security in Turkey, especially given that Bashar's regime has various tools of sabotage in his neighboring country. Turkey’s Alawite sect numbers 13 million people, many of them having contacts inside Syria and are connected by family ties, which include regime supporters.

On the joint border there are Kurdish groups under the authority of the outlawed PKK, which has opposed the ruling regime in Turkey since the 1980s. These two groups — the Kurds and the Alawites — are tools to pressure and destabilize Turkey, pushing Ankara to intervene in Syria to preserve its internal security.

Turkey shares a close sense of contact with the people of Syria, a former Ottoman state for 400 years, as well as their common religion, geography and overlapping genealogies.

Ankara knows full well that the international efforts to prolong the crisis in Syria target Turkey in terms of outcome. It also knows that the attack is in large part an attack on Islam, while it also feels that the Arab nation is its strategic depth.

Based on the above and as a result of the West’s awareness of the closeness between the Turks and Syrian Arabs, it has tried to prevent Turkey from playing a major role in solving the “Syrian issue.”

What is Turkey’s role today (and some blame Ankara) but accepting the minimum of what can be done? Turkey must endure the joint international forces and the aims of every individual country, which all agree on aims that harm the unity of Syrian territory, the revolution and Turkey at once. All these states have agreed to neutralize Turkey so that its role is limited to preserving its national security, without being able to do more than that.