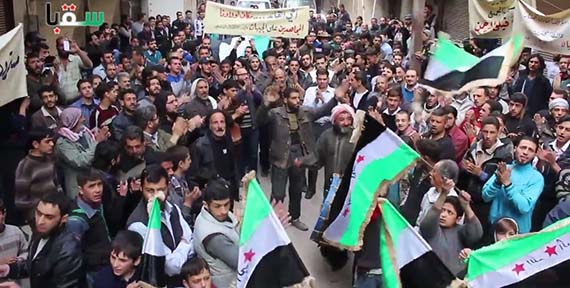 As the Saqba local council approaches the end of its term in April after one year, city activist meetings began to discuss means to form a new body. In the past, notables, activists, elders and university graduates would gather in the hundreds inside a hall to select from among a set of candidates. The invitees rarely knew who the candidates were before attending the meeting and not all those who wanted to run knew how they were able to do so. Many potential candidates were dissuaded out of fear of embarking on a process whose arrangements they were not familiar with.

This year it was decided to set up a general secretariat for the city, formed with 60 people through the agreement of activists. The secretariat formed an election committee from five people and left them to decide how to perform local council elections with voting to be completed within the secretariat. The council proposed an idea of general elections and an idea limited to their implementation after weeks of discussion among its members. The most prominent name that had pushed to go beyond the old tradition of selection the council may have been Fadi Haroun, a lawyer and defected soldier, and brother of Shadi and Hadi, who were arrested during peaceful protests and given prison sentences of 15 years. The brothers boast a library at home, rarely found in a house in Saqba, while their mother has a university degree, possibly the only woman in the city to receive one.

The voters were selected as being from people of the city or those who have resided there for a period of more than seven years and who are older than 20 years. The conditions for nomination were defined by age, as the candidate must be over 28 years old, their accomplishments in the revolution, and not having been charged with a crime in the judiciary, in addition to holding the degrees required for each position.

The election campaigns were to focus on the platform of each candidate and the reasons they were superior without competitors accusing one another of theft or carrying out a crime. Some candidates published advertising promoting their platforms and organized meetings to present their plans and promises and to gather support. These campaigns of course did not resemble those previously held in Saqba, which were largely for cheering Syrian President Bashar al-Assad and his father, with blood and soul, than any useful discussion.

The elections began at 9 a.m. on the morning of July 25, and at that day I went down to the streets at noon to watch people’s reactions. I stood with a gas vendor and spoke with him after I learned that he had voted. His eyes filled with tears as he spoke about the greatness of what he saw in terms of respect and organization. He witnessed young men who seemed to be working for the city and brought me in his car to see them. They told me something I did not expect to hear, and informed me that they had voted and that they had recently learned why the revolution was carried out — that the revolution was for the people, their participation and their respect, without anyone, and that without the people and their participation there would be no revolution. I was surprised and remained silent while I listened.

In the centers there were people taking others’ opinions. An old man said that he had not voted since the days of Shukri al-Quwatli, and another, asked about how he felt, said: “I now feel that I am a citizen. The word democracy is now on the tongues of many who did not dare to say it during the days of Assad’s rule and during the rise of ISIS and Nusra in the Eastern Ghouta, and the days when the Jayish al-Islam [Army of Islam] and its leaders put democracy beneath their feet and declared those who said it to be infidels."

The elections ended at 3 p.m. and the ballot boxes were transferred for vote counting, which began at 4 p.m. and ended at 11 p.m. and concluded with the reading of a statement of the election resulted, in which Yasser Obeid won the council presidency.

The participation rate reached a quarter of those who have a right to vote (1,500 people), a rate that was not expected, compared with about 5 percent of voters in previous years. The special elections for the offices noted above were held before the general elections and they resulted in the election of Dr. Sami al-Sheikh to the medical office, Sheikh Taisir al-Sin in the Shariah office, while the election for the education office will be re-run after an appeal to the results.

After this, the council issued a closing statement and young people sang songs of the revolution: "The Baath Have Gone Mad," "Freedom, Freedom," and "Curse Your Soul Hafez," in all their various melodies. No one wanted to return home to sleep even after the weariness of the summer heat in a closed space where there was no electricity for a fan for seven hours, but instead went out to continue their night with joy for what had been achieved.