Former Coalition president says a Russian-U.S. consensus on letting Assad remain ignores the roots of the catastrophe, and may accelerate the collapse of the region 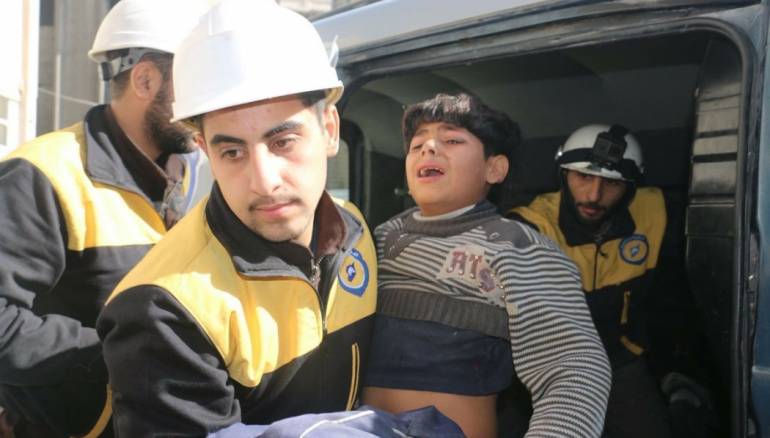 Saudi Arabia's Foreign Ministry announced last week it will host a meeting of the Syrian opposition later this month. The meeting, which will be held in the capital Riyadh, aims to bring together opposition factions and form a joint negotiating delegation ahead of a new round of U.N.-brokered peace talks with the Syrian regime set for Nov. 28.

The Riyadh meeting allegedly comes at the request of the Syrian opposition, according to the ministry statement, which failed to make any mention of the umbrella body representing the Syrian opposition — the High Negotiations Committee — despite initial recommendations to increase its members in order to enhance its negotiating powers.

This neglect to mention the body in its statement has signaled the end of the HNC’s role and the birth of a new body that will bring together parties from the Cairo and Moscow talks.

The move should come as no surprise as regional and international pressure mounts on the Syrian opposition to be "more realistic" in its political demands and to keep up with recent international developments. This became clear following a joint statement between U.S. President Donald Trump and his Russian counterpart Vladimir Putin on the sidelines of the APEC summit on Nov. 11.

The statement — which was a clear indication of Trump's alignment with Putin on Syria — reduced the conflict to "a war on terror" and found that the only political way forward is through constitutional reforms followed by elections, for which dictator Bashar al-Assad will be allowed to run.

The joint statement also makes no reference to the U.N. Security Council Resolution 2118, which calls for a political transition and the establishment of a transition governing body as a fundamental starting point for resolving Syria's political crisis — and so effectively nullifies previous statements by Washington that there is no role of Assad in the future of Syria.

This notable shift in position will undoubtedly become the basis of any future negotiations for a political process under international auspices.

This became particularly evident when the U.N. envoy to Syria Staffan de Mistura announced earlier in his briefing to the Security Council that the Nov. 28 talks will address constitutional reforms and an election in Syria, marking no real difference between the Geneva talks and the conference Putin plans to hold in Sochi.

During the meeting, the request to remove Assad will be set aside and a political solution will be based on constitutional reforms and participation in general elections — all of which were previously rejected by the Syrian opposition.

Diplomatic efforts were based on their legitimacy due to the popular uprisings and revolutionary forces on the ground in Syria.

However, with the emergence of support for Assad's counter-revolution, cracks began to appear over the intentions of some states within the Friends of Syria Group. This included Arab countries Saudi Arabia, the United Arab Emirates, Egypt, Jordan and Qatar, as well as the U.S., France, the U.K., Italy, Germany and Turkey. It was followed by the occupation of Syria by Russian forces, which some saw as an opportunity to weaken Iranian influence in the region.

Efforts were made to "alter" the revolution — reversing the balance between diplomatic efforts and the influence of the armed opposition on the ground.

This meant that regional countries worked to link the legitimacy of the opposition with international recognition and containing Syrian rebel forces.

The revolutionary momentum has helped political bodies involved in the movement overcome recent dilution — beginning with the “Ford-Seif initiative” that was signed by the former U.S. Ambassador Robert Ford, and the current head of the Coalition, Riad Seif.

The plan was aimed at ending the National Assembly and limiting the influence of the Syrian opposition in Doha, including local councils, national figures and components to the Syrian National Council.

Furthermore, there was also the expansion that was imposed on the Coalition, including the introduction of the Ahmed Jarba bloc and his inauguration — and subsequent overthrow — as the head of the Coalition.

This was then followed by the resignation of most members of the bloc, as well as the formation of the HNC at the Riyadh conference, which saw Russia introduced as a key international player in the Syrian conflict for the first time.

Over the past five years the revolutionary forces on the ground in Syria have lost the majority of its military leadership. The political bodies abroad and the internal revolutionary movement have also lost influential members, and the burden of the revolution has become greater on those who seek its victory. In what seems to be apparent attempts at infiltration, some corrupt individuals are making crucial decisions on behalf of the revolution.

It is also worth noting the role of U.N. envoy in contributing to the gradual dilution of the opposition and transforming the Geneva talks from negotiations formed on the basis of Security Council Resolution 2118, into a somewhat useless dialogue between the HNC and delegates formed by de Mistura and his team in Moscow and Cairo.

This includes the meetings in Geneva and Lausanne — a move that was presented as a political consensus among all parties, including the opposition.

It is remarkable that most of the characters who emerged from the political stampede between the revolutionary demands and international pressure were invited to participate in the new opposition conference in Riyadh.

This meant that the new engineering output of the opposition would fit the new international framework in an unprecedented manner. But is this the way to solve the crisis?

Dictator Bashar al-Assad began his campaign against the Syrian people's movements and demands for dignity with mottos like "None but Assad" and "Without Assad, the country burns."

Today, the scene in Syria shows that Assad has indeed lost the basic elements of the state, which are represented in land, people and institutions. Meanwhile, killings on land and from the air continue, despite agreements to reduce the escalations in violence across the country. There is no longer a Syrian army, but an out-of-control group of foreign militias and mercenaries killing in its name.

The guarantor in any agreement is the Russian occupier itself, which continues to violate the sanctity of talks during every round, whether in Geneva or Astana.

No solution with Assad

Political realism stipulates that the political solution should root out the cause of the disaster, which in this case is Assad himself and the vicious circle of peers surrounding him. As long as the dictator Assad remains in power, the killing will continue. After Assad cut the cord that once connected his people, there is no longer a system that can be rehabilitated.

Now, the Assad regime is a gang run by a dictator under the supervision of the Russian occupier, which sees no solutions to a political crisis but through the burning of land and compliant agents to run the country, as was the case in Chechnya.

The Syrian revolution was a natural response to a region-wide call for the restoration of dignity, changing the course of history and altering the geopolitical map of the world.

Despite this, it is a unique case that no force — no matter how large and mighty — can contain or handle. The most powerful element behind the revolution is the general public, despite the considerable difference in power when compared to the Russian aggressor.

But the current approach — which largely ignores the roots of the catastrophe in Syria — will only help spread the chaos and may accelerate the collapse of the region. No solution can be imposed on the ground if it is dismissed by the general public.

The Syrian people, who sacrificed money and self to enjoy future generations of freedom and dignity continue to repeat the same lines that have echoed since the beginning of the revolution: "The people want to overthrow the regime."