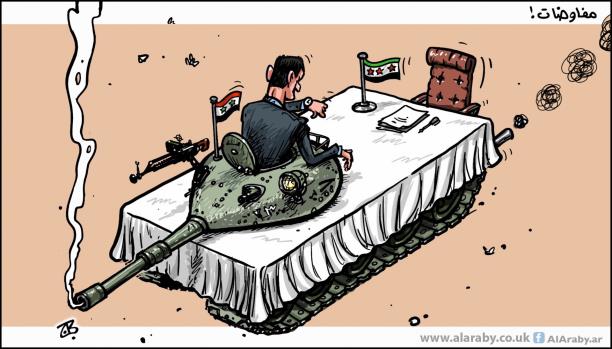 President Bashar al-Assad’s negotiating delegation arrived to Geneva more than 24 hours late from the time that was specified by the United Nations for its arrival. The arrival was considered a success for the international efforts which convinced it to come, despite the fact that the head of the delegation, Bashar al-Jaafari, refused the request of the U.N. envoy, Staffan de Mistura, to enter into direct talks with the opposition delegation, and refused to stay in Geneva to give sufficient time to the negotiations, while rejecting the agenda presented by the United Nations, proposed by the opposition. Despite that, Western media celebrated what it called a beginning to practical negotiations in Geneva.

No one has so far condemned the behavior of Assad, who has impeded the institutions of the international legal system, and has dealt with them with a contempt resembling that of Adolf Hitler toward the League of Nations before World War II. Rather than meeting Jaafari and his gang with rejection and disapproval, we see de Mistura wearing a broad, happy smile on his face, and extending his arm a length of 10 meters in order to honor Jaafari with a shake of his hand, hands which are soaked with the blood of thousands of Syrians. If killers are treated with such enthusiasm, why would you concede and obey international resolutions and stop killing Syrians, for whom none of seven decisions have been implemented, which were said to be taken to guarantee their right to a bit of bread, a school chair, medication, a safe roof, and their right to life, which even the constitution of the United States considers sacred! The Russians announced that the agreements would finally restore security, safety, bread and a safe roof to the people of the Eastern Ghouta, and that military police would ensure that the regime stops its bombardments and assaults. But Assad, who signed the deal with ease, was on another path, as the bombardment has not stopped for one minute, and after assaulting the Ghouta from one direction, he started to attack it after the “truce” from three directions with bombs, the dust of whose explosions nearly reached the noses of the workers in the U.N. building in New York.

Despite that, Moscow does not see what is happening, and forgot that it is a guarantor of the de-escalation zone, and has not been shy about presenting a proposal to hold a two-day truce. Its face did not grow red when it canceled out an agreement signed with its participation, whose introduction declared it would stay within the framework of the Geneva document and U.N. Security Council Resolution 2118, and was therefore an international agreement overseen by the United Nations and its Security Council considered part of the peace process. Moscow forgot this, and the Kremlin expressed its gratitude because the regime delegation arrived to Geneva in order to derail the negotiations, before a truce in a de-escalation zone where President Vladimir Putin had vowed to stop fighting. Now the truce will end, and the Ghouta will be bombarded again, and its children will be killed, who are threatened with death by starvation at a rate of 12 percent — up from about 2 percent before the truce.

If Moscow proposed the truce, and it knows that it was canceling the de-escalation agreement which it was the patron of, why should the regime abide by them — the truce today and the agreement at all? And why should Assad concede his right, which is guaranteed by Russia and internationally, to continue his war against the Syrians, and derail the international negotiating process for peace and an international agreement Moscow said was for de-escalation — then proposes to abolish? Has it forgotten that it is its international agreement serving the interests of peace? And then, does the world not notice the correlation between the results of the Russian truce canceling the Russian agreement? Does it not notice what is being done by Assad’s political gangs which are derailing negotiations for a political solution in response to international resolutions, and which has met, despite that, with U.N. acceptance, rewarding it for bearing the hardships of traveling by plane to Geneva, at a time it chose, for a period needed to express its dismissal of the world and its contempt for its institutions and resolutions?

Putin said two weeks ago: All conditions for peace are there … and the evidence is what the regime is doing in Geneva and the Ghouta with Russian backing and international silence.