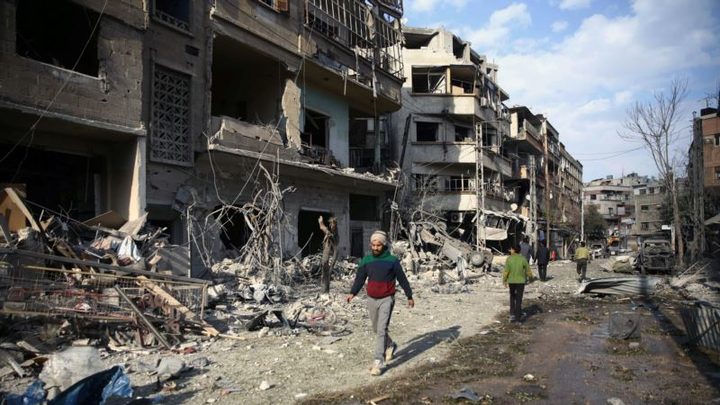 The Syrian regime and its allies continued to carry out their attacks against the civilian-populated cities and towns of the Eastern Gouta despite the adoption of a United Nations Security Council resolution calling for a 30-day nationwide cease-fire.

The number of civilian casualties continued to increase on Monday as a result of the shelling of residential areas in the Eastern Ghouta, reaching 32 civilians, including five children from the city of Douma. This brought the number of children killed to 12 in just 48 hours following the adoption of the UNSC resolution.

Civilians continue to live in underground shelters with a lack of basic essentials including food, security and heating. This is happening despite the clear emphasis in Resolution 2401 which calls for lifting the siege on the Eastern Ghouta and ensuring access to food and medicine for civilians.

The discharge of sewage water inside many shelters further complicates these already tragic conditions, where the civilians are still confined to cramped shelters and basements without the possibility of fleeing due to the continuous shelling.

At the time writing, no medical aid has been allowed enter to the area while no official statement has been made on when such supplies will be provided. Medical supplies are crucially needed to save the lives of the critically injured civilians caught in the barbaric shelling of the Eastern Ghouta in recent days.

Schools remain suspended since Feb. 7, with 52,000 students denied their right to education as a result.

All nations sponsoring this U.N. resolution are obliged to follow up on its implementation as stipulated in its articles. Civilians must not be forced or pressured to evacuate their cities. All sponsoring nations must ensure the full implementation of this resolution so that no more civilian lives are lost in the Eastern Ghouta — home to 367,000 civilians, including 115,000 children — under the pretext of fighting the Nusra Front organization.

Children and civilians are entitled to special protection under international law, and may not, under any circumstances or justification, be attacked or targeted. Their safety and security must be guaranteed at all times and in all conditions.