Disputes continue with the Ahrar al-Sham movement, with no final agreement made on who will lead the group writes Enab Baladi. 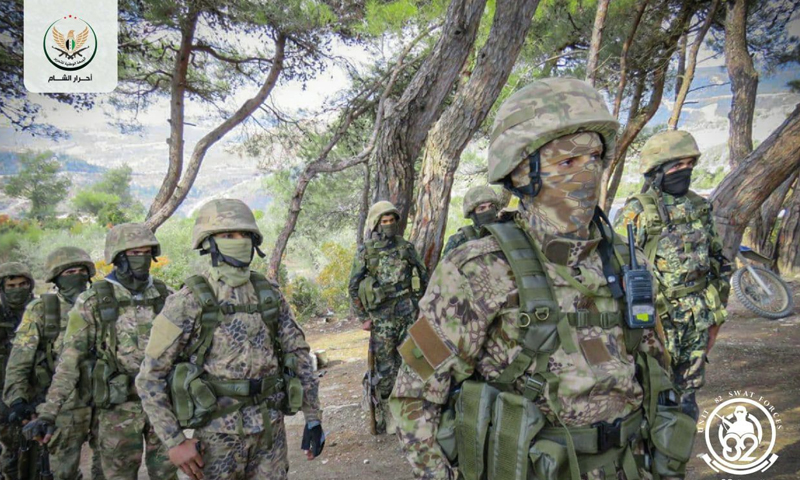 Muhannad al-Masri, nicknamed Abu Yahya al-Ghab/al-Hamwi, stands out as the most prominent name to likely become the leader of the Ahrar al-Sham movement. This comes on the heels of the recent dispute between the current leader of the movement, Jaber Ali Pasha, and former leader, Hassan Soufan. No final agreement has been reached regarding the person who will lead the movement in the impending stage.

Political researcher Maher Alloush told Enab Baladi on Thursday that, “until now there has been no final agreement between the parties, and as of yet, a new leader has not been appointed and deliberations are still taking place.”

Alloush is one of the people who entered into mediation between the two wings of the movement. His mission was, “to soften communication between the parties, converge points of view, and work at opening new horizons for a potential solution,” as he put it.

Pages on social media reported that Masri was appointed to succeed Pasha, thus putting an end to the dispute. However, the movement’s leadership had not issued any statement fleshing out the details at the time of writing.

Masri took over the leadership of the movement after the killing of its founder and first leader, Hassan Abboud, nicknamed Abu Abdullah al-Hamwi, in September 2019, alongside a number of top leaders such as Engineer Hashem al-Sheikh, nicknamed Abu Jaber.

Abu Jaber handed in his resignation one year after taking up his duties to pursue new experiences, as he put it, which made him the third leader of the movement. Ali al-Omar and Sheikh Hassan Soufan succeeded him, followed by the movement’s current leader, Jaber Ali Pasha.

In a statement, Darwish demanded that the former leader of the movement, Sheikh Hassan Soufan, be appointed as Ahrar al-Sham’s commander-in-chief, which was considered a coup against the current leadership. The latter issued a decision to dismiss Darwish and restricted his scope of work to the movement’s military council. He was eventually replaced by Abu Faisal al-Ansari.

The movement’s leadership relieved Captain Abu Suhaib of his duties as deputy commander of the military wing and appointed Abu Musa al-Shami in his stead. Abu al-Ezz Ariha was appointed instead of Abu Mahmoud Khattab.

The schism in the ranks of Ahrar al-Sham further deepened, for on Oct. 23, 2020, the movement’s headquarters were seized by the wing opposing the General Command, represented by Soufan and Abu al-Munther.

The wing opposing the Ahrar al-Sham leadership took over several headquarters, most notably Headquarters 101 in the city of Jericho, south of Idleb, and other headquarters in the village of al-Fu’ah in the eastern Idleb countryside, according to Enab Baladi’s correspondent in Idleb.

The correspondent quoted members of Ahrar al-Sham who said that its commander-in-chief, Jaber Ali Pasha, had, at an earlier stage, ordered the emptying of the headquarters in Jericho, al-Fu’ah, and other places where equipment is stored and people are stationed, and transfer them to Afrin, northwest of Aleppo.