President Assad delivered a speech at the International Conference for the Return of Refugees in Damascus and said that effort were being made to provide all services needed for returning Syrians writes SANA. 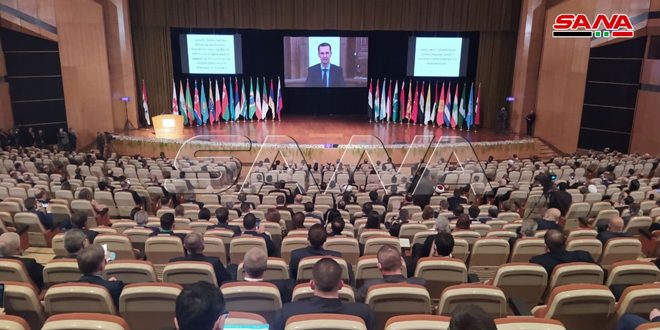 Following is the full speech as published by SANA.

“I welcome you in Damascus dear guests… welcome in Syria which although, it has suffered from long years of war, the cruelty of the siege and the criminality of terrorism, it still cheers for meeting its true lovers and those who are truly loyal and who bear in their hearts, minds and conscience the cause of human in every time and place.”

President al-Assad said “In the beginning, I thank our Russian friends for their great efforts in supporting the convening of this conference despite of all international attempts to foil it.”

“I also thank the Iranian friends for their efforts in this regard and for their true support which have contributed to easing the repercussions of the war and the impacts of the blockade,” the President added.

The President went on saying “I highly appreciate your coming to Damascus and your participation in this conference, and I mainly thank the states which have received Syrian refugees and embraced them, and whose people have shared their livelihood and job opportunities with the Syrians despite of the economic suffering in those countries.

He went on saying, “Dear participants, some states embraced the refugees based on ethical principles while other states in the West and in our region also are exploiting them in the ugliest way through transforming their humanitarian issue into a political paper for bargaining, in addition to making them as a source for money without taking into consideration the real suffering lived by the Syrians abroad.”

The President said “Instead of the actual work to create the appropriate conditions for their return, they forced them to stay through temptation sometimes or through exerting pressures on them or intimidating them, and this isn’t surprising as those governments have worked hard for spreading terrorism in Syria which caused the death of hundreds of thousands of its people, and displaced millions of them. Those states can’t be logically the same ones which are the reason and the road for their return to their homeland, and their rejection to participate in this conference is the best evidence on that.”

The President said that if the issue of refugees according to the world is a humanitarian issue, it is for us, in addition to being a humanitarian issue, it is a national issue, adding that “we have managed over the past few years in achieving the return of hundreds of thousands of refugees, and today, we are still working relentlessly for the return of every refugee who wants to return and to contribute to building his/her homeland, but the obstacles are large as in addition to the pressures exerted on the Syrian refugees abroad to prevent them from returning, the illegitimate economic sanctions and the siege imposed by the US regime and its allies hinder the efforts exerted by the institutions of the Syrian state which aim to rehabilitate the infrastructure in the areas which had been destroyed by terrorism so as the refugees can return and live a decent life in normal conditions, and this is the main reason for the reluctance of many of them to return to their areas and villages due to the absence of the minimum basic requirements for life.

President al-Assad said that the overwhelming majority of Syrians abroad today more than ever want to return to their homeland because they reject to be a “number” on the political investment lists and a “paper”  in the hand of regimes which support terrorism against their homeland.

The President added that the issue of the refugees in Syria is a fabricated issue as Syria’s history and from centuries ago hasn’t witnessed any case of collective asylum, and despite of that Syria, throughout its ancient and modern history, has suffered from successive occupations and continuous disturbances till the sixties of the last century, yet it has remained the place to which those who flee the disturbances and different crises resort, especially since the beginning of the twentieth century and the Ottoman massacres till the invasion of Iraq in the year 2003, and all of that history hasn’t mentioned any wars among the Syrians for ethnic, religious or sectarian reasons, neither before nor after the establishment of the Syrian state.

“And as the objective conditions don’t lead to the creation of a situation of asylum, it was necessary for the Western regimes led by the American regime and the states which are subordinate to it from the neighboring countries, particularly Turkey to create fabricated conditions to push the Syrians to collectively get out of Syria, to find a justification for the interference in the Syrian affairs, and later to divide the state and transform it into a subordinate state that works for achieving their interests instead of the interests of its people,” the President added.

President al-Assad added: “Spreading terrorism was the easiest way, and it started by establishing the Islamic State terrorist organization in Iraq in the year 2006 under the patronage of the US which during the war on Syria joined other terrorist organizations such as the Muslim Brotherhood, Jabhat al-Nusra and others, and they destroyed the infrastructure and killed the innocent people, in addition to paralyzing the public services intimidating the Syrians and forcing them to leave their homeland.”

The President said “In the year 2014, and when the Syrian state seemed to be on its way to restore security and stability, these countries mobilized the terrorist groups with the aim of dispersing the armed forces and enabling terrorists to control a large part of the Syrian territory, the largest part of which has been restored thanks to the sacrifices of our national army and the support of our friends, this support which had played a great role in defeating terrorists and liberating many areas.”

The President added that Today we are facing an issue which consists of three interconnected elements; thousands of refugees who want to return, destroyed infrastructure which worth hundreds of billions and which were built throughout decades, and a terrorism which is still tampering with some Syrian areas.

The President went on saying “The Syrian State institutions have managed to achieve acceptable leaps compared with their potentials in dealing with such a big challenge….Along with the continued war against terrorism, they have offered facilitations and guarantees for the return of hundreds of thousands of refugees to their homeland through several legislations such as delaying the compulsory military service for a year  for the returnees, in addition to issuing a number of amnesty decrees from which a number of those who are inside the homeland or abroad have benefited.”

The President said that in parallel with and despite of the illegal siege, the Syrian state has been able to restore the minimum of the infrastructure in many areas such as water, electricity, schools, roads and other public services to enable the returnees from living even with the minimum necessities of life.

The President added “The more the potentials increase, these steps will be faster certainly , and their increase is connected to the recede in the obstacles represented by the economic siege and the sanctions which deprive the state of the simplest necessary means for the reconstruction and leads to the deterioration of the economic and living conditions in a way that deprives citizens of the decent livelihood, and deprives the refugees of the chance to return due to the decrease in the job opportunities.”

The President went on saying “I am confident that this conference will create the appropriate ground for cooperation among us in the upcoming stage for ending this humanitarian crisis which was caused by the largest barbaric Western aggression which the world has ever known in the modern history….This crisis, which at every moment affects every home in Syria and the conscience of every honest person in the world, will remain for us as Syrians a deep wound which will not be healed until all those who were displaced by the war, terrorism and siege return.

The President concluded his speech by wishing the activities of the conference a success through reaching recommendations and proposals which directly contribute to the return of the Syrians to their homeland so as Syria will become, by them and by those who stayed and remained steadfast over ten years, better than ever.