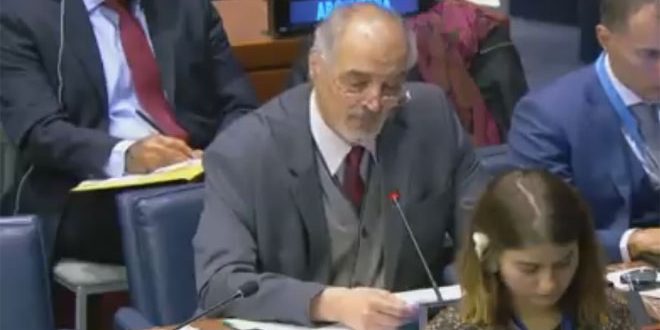 Syria’s Permanent Representative to the UN, Dr. Bashar al-Jaafari reiterated Syria’s call to free the Middle East from weapons of mass destruction and to exert pressure on the Israeli entity to put all of its facilities and nuclear activities under the supervision of the International Atomic Energy Agency (IAEA).

In a statement delivered before the Disarmament and International Security (First Committee) general debate at the UN, Jaafari indicated that the challenges facing our world have increased and primary among them is the development of the nuclear arsenals and the threat of using them, in addition to the spread of terrorism and its adoption as a political weapon by certain states, some of which are permanent member of the Security Council.

Jaafari affirmed that continuing to protect Israel’s possession of nuclear weapons and ignoring its refusal to join the Nuclear Non-proliferation Treaty (NPT) has become a clear issue for all, as the US and Britain foiled the 2015 Review Conference of the Parties to the NPT.

He indicated that the continued support by the US, Britain, France, Canada, Germany, and others has contributed to the development of the nuclear, biological and chemical weapons programs of Israel, and has encouraged the Israeli entity to increase its defiance of the international will by not jointing the NPT and the other agreements on WMDs.

“At the end of 2003, my country, through its membership of the Security Council, proposed an initiative to free the Middle East of all WMDs, particularly the nuclear ones. At that time the US delegation threatened to use the veto if we submitted the proposal,” Jaafari said.

He added “In this context, my country renews its call upon the member states to free the Middle East of nuclear weapons and all WMDs, and we call for the exerting of pressure on Israel to join the NPT and to put all of its facilities and nuclear activities under the supervision of the IAEA.”

“The government of my country condemns in the strongest terms the crime of using chemical weapons, based on its belief for a Middle East free from all WMDs, on top the nuclear ones,” Jaafari affirmed.

Jaafari noted that Syria joined the NPT and adhered to all of its obligations despite of the hard circumstances it is going through.

He said that Syria sent more than 160 letters to the UN Secretary General, the Security Council, the Joint Investigative Committee, the committee of the resolution No. 1540, and the committees on combating terrorism, in which it affirmed its concern over the support that terrorism was receiving by some states, which are providing chemical weapons to terrorist groups, all while they claim that Syria used such weapons.

Jaafari affirmed that the Conference on Disarmament is the only forum with regards to the disarmament, and that Syria expresses condemnation of the politicization practiced by Western states at the Conference.

At the conclusion of his statement, Jaafari said “terrorism, which is backed and supplied with toxic chemical weapons, will have repercussions on the governments of the states which support terrorism and on other states.”

He asserted that the member states should shoulder their responsibilities by stopping the smuggling of weapons and ammunition, whether they are lethal or not, and the smuggling of militants and terrorists through the borders of Syria’s neighboring states.