This is an unprecedented number of deaths due to the cold, due to a convergence of poor health and immunity resulting from malnutrition 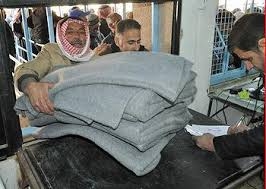 At least 20 people, mostly elderly and children, have died in northeastern Hassakeh province due to the latest harsh wave of cold weather sweeping the area.

Activist Mahmood al-Ahmed noted that three people died in Tal-Khamis as a result of the cold weather, resulting in a total of 10 elderly individuals who have died from the cold. This is an unprecedented number of deaths due to the cold, due to a convergence of poor health and immunity resulting from malnutrition.

The activist added that 10 other people have died in hospital as a result of neglect. Eight of them were infants who died because of lack of oxygen when electricity was cut off, while another two died when electricity cuts halted the life support machines on which they depended.

Meanwhile, the loyalist militia of Sotoro announced via a statement that Patriarch Ignatius Ephrem II, representative of Patriarchate of Antioch and of all Syrian Orthodox, attended a meeting at the hall of the Church of St. James Nasippini for Syrian Orthodox in Qamishli city. The meeting was attended by representatives of all churches, parties, and groups, and the “Sotoro” pffice of protection issued a statement showing the conditions and suffering of the Christian community resulting from so-called self-administration.

The statement noted that the meeting was also attended by prominent figures from the loyalist Council of Hassakeh's, which met later with the chief officer of the Kurdish Asayish forces in the church hall. The Asayesh leader promised to sort out all of the difficulties and obstacles to resolving the conflict and fighting terrorism.

Special committees formed after the meeting started their efforts to reach solutions to the conflict among all parties in Qamishli, and to implement what has been agreed upon in the statement. This took place amid anticipation that the Minister of Interior Mohammed al-Shaar and the governor of Qamishli would attend.

The Democratic Union Party, or “PYD,” shares control over Qamishli with the Syrian regime, while Sotoro militias are deployed in the Christian neighborhoods of the city. Other Christian militias exist in areas controlled by the PYD in Tal Tamer and Malikiyeh.