The evacuees, which included hundreds of women and children, were covered by an agreement with Russian forces and the regime writes Zaman Al Wasl 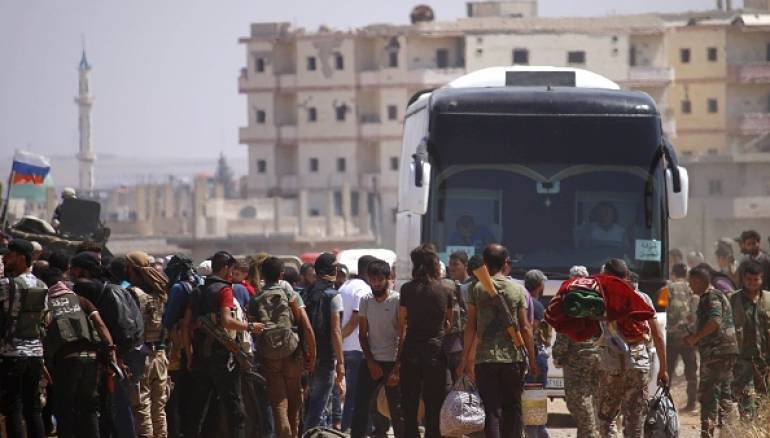 After being held for seven hours by a Shiite militia at the gates of central Homs city, 55 evacuation buses have continued on their way to northern Idleb province, activists said Sunday.

Asaeb Ahll al-Haq blocked the evacuation route of hundreds of rebels and their families who were heading Idleb province as part of a surrender deal with Russia in southwestern Syria.

Russian efforts have succeeded in pressuring the Iranian militia to let the convoy through, sources said.

The convoy included 800 children and 700 women

Under the deal, more convoys are expected to follow from the southwestern province, which is located adjacent to the Israeli-occupied Golan Heights.

On Saturday, the first convoy of evacuees from Quneitra province arrived in opposition-held Idleb province.

The convoy of 40 buses carried around 500 evacuees, according to an Anadolu Agency reporter in the region.

A similar deal was recently implemented in Syria’s southwestern Daraa province, which allowed regime forces – along with Russian military police – to deploy along the nearby border with Jordan.