Following recent statements, it is thought that Mazloum Abdi could leave the PKK and that foreign fighters could withdraw from eastern Syria writes Alsouria Net. 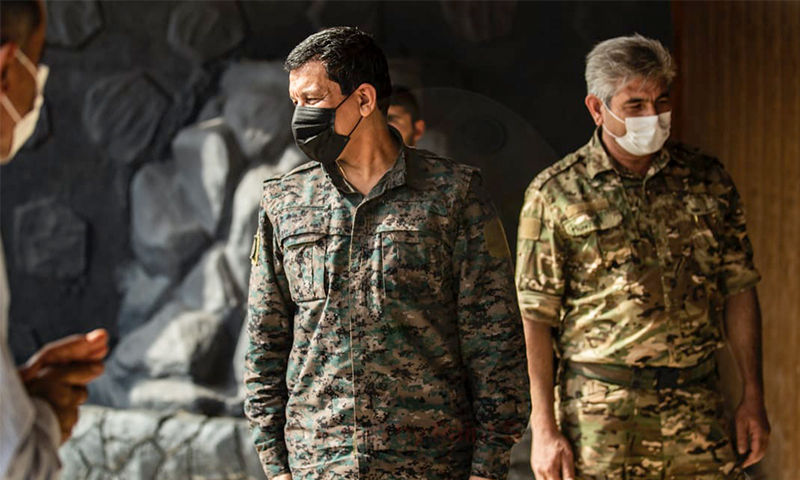 The admission by the SDF leader of the PKK’s participation in military operations in Syria cannot be analyzed in dissociation from the general context in the areas controlled by the SDF, which have become militarily threatened on more than one axis, whether by the Turkish army or Assad’s forces and Russia, in addition to the fact that they are awaiting the policy of the new US administration led by Joe Biden, and whether it will differ from the course adopted by the Trump administration.

Abdi’s statements regarding the PKK came in two parts. The first was during his interview with the International Crisis Group, in which he acknowledged the involvement of Hezbollah fighters in northeastern Syria. The second was through PKK-affiliated media, days ago, where he praised the sacrifices of the PKK fighters in Syria. He revealed that more than 4,000 of its fighters have been killed.

Writer and journalist, Hoshank Osi, believes that Abdi’s statements are positive and they should be welcomed by all parties, especially Ankara and the leadership of the PKK in the Qandil Mountains.

Osi explains, “Recognition is a step towards the exit of the Workers’ Party fighters from Syria, which is a decision that has been taken, but it won’t be quick. There is a timetable for withdrawal from the various administrations that the party officials are managing.”

Abdi made it clear in his interview with the International Crisis Group that the process of withdrawing non-Syrian fighters from their current positions began gradually and continues with no commitment to a timetable for the complete withdrawal, indicating that the matter is being mediated by the US and talks with other Kurdish forces, including the Kurdish National Council.

Is it easy to get the PKK out of Syria?

In the view of Osi, Abdi wants an honorable, safe, and smooth exit from these areas for the Kurdish party fighters, and he believes that eastern Syria no longer needs workers, for there are already enough at the administrative and military levels.

However, the unresolved question is: Will the Workers’ Party accept this exit? Will the Qandil Mountains, and Damascus, and Tehran agree to this decision in the eastern Euphrates?

Osi says the Workers’ Party, “considers that the land upon which their fighters’ blood is shed automatically becomes theirs.”

Osi stresses that, “the Workers’ Party’s exit from Syria is difficult, because Rojava has been the beating heart for more than 30 years, which is evidenced by the presence of Abdullah Öcalan in Syria in the 80’s.”

According to Osi, the existence of two currents within the SDF is gradually crystalizing. The first is completely subordinate to the will of the Workers’ Party, led by Aldar Khalil, while the other seems to be trying to create a state of independence from the Workers’ Party, and is led by Mazloum Abdi.

Osi adds, “There are differences that exist between these two currents, and the Americans are lining up with Abdi’s for now,” considering that the latter should start by announcing his resignation from the membership of the Workers’ Party, because he was one of its prominent leaders and a member of a central committee.

Abdi was one of the first Syrian cadres to join the Workers’ Party after the mid-eighties.

“In the context of these positive statements, Abdi is supposed to officially announce his resignation as a member of the Workers’ party and as a leader,” said Osi.

According to researcher and academic, Ahmad al-Qirbi, Abdi’s speech comes at time of two crucial elements: the first is the threat of the Turks to launch new military operations, whether in Ayn Issa or the rest of the areas on the border.

As for the other element, Qirbi told Alsouria Net, it is the imminent arrival of the new US administration, headed by Joe Biden, known for sympathizing with the Kurdish side, unlike the Trump administration.

Qirbi pointed out that, at present, the SDF are in possession of several power cards, most notably the geographical location that they control, in addition to their trying to represent the Kurdish side, meaning their investment in the Kurdish cause, as well as the relations it enjoys with Western countries.

The not-so-new decision to disengage

Although acknowledging the Workers’ Party’s presence in Syria and the beginning of its gradual withdrawal is considered the first step of its kind involving SDF leaders, this matter is not recent. Rather, it dates back more than a year, to the Donald Trump administration.

Therefore, it seems that the disengagement process between the SDF and the PKK is not related to Biden taking office only. Osi notes that the process of removing, “the specter of the Worker’s Party from the decisions of the Syrian Kurds is an American decision that was made nearly a year ago.”

Osi continues, “If the Trump administration had won the elections, this project would have been completed,” considering that the entirety of what is happening in Syria has nothing to do with the advent of the Biden administration. Rather, the disengagement project came to life in the Trump era and will be implemented in the Biden era.

Abdi had said at an earlier stage that Biden’s victory could lead to a change in Ankara’s behavior, as Turkey’s options would be reduced and the reigning circumstances no longer favor Turkey’s aggressive position, under the new US administration’s rule, according to Abdi.

Abdi considered that the success of the talks with the Kurdish National Council and the work of all Kurdish parties together, will have a positive impact on the Kurdish parties’ relationship with Turkey and would “rob Turkey of its excuses for its continued hostility towards them,” all the while giving the two parties economic opportunities.