A bakery in Tel Tamr is giving women the opportunity to earn money and support their families, by using their skills and knowledge to bake bread for the local community reports North Press. 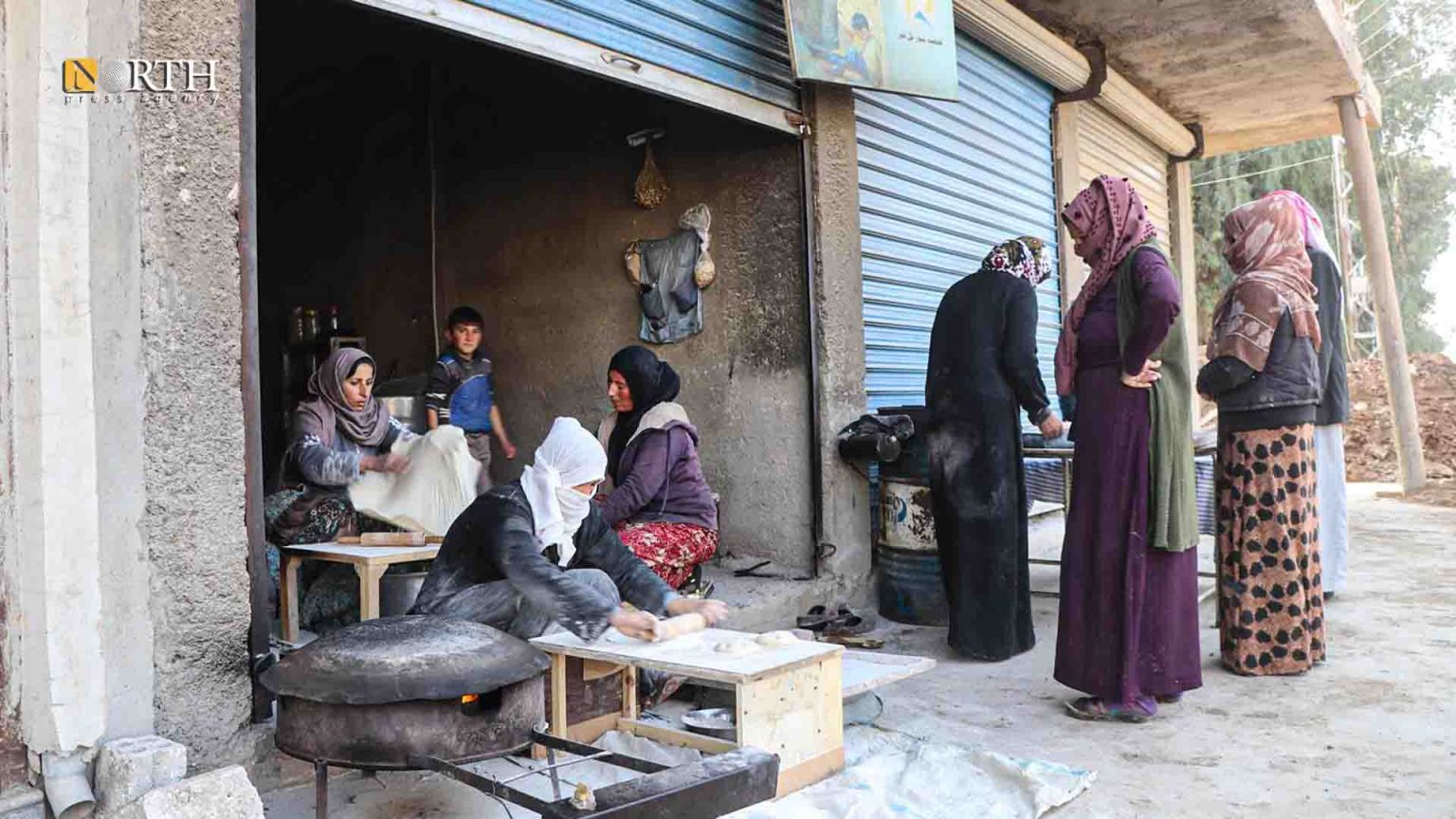 Iman Suleiman, along with three other displaced women, work as bread makers and run the Tel Tamr Tannour Association project, which was inaugurated eight months ago with the support of the Economic Committee of Tel Tamr Town Council of the Autonomous Administration of North and East Syria.

Iman Suleiman and the other women following their displacement, came up with the idea of opening a bakery, due to the invasion of Ras al-Ayn carried out by the Turkish army and the affiliated armed opposition groups.

These women said that their families need their work to cope with living conditions that have deteriorated during the war years, especially after their displacement.

Suleiman told North Press that she is a mother of six and that her husband’s health condition does not allow him to work, which led her to start the project.

“The reason that prompted us to open the bakery is that we are not certified, and there is no work we master except making bread and housework,” she added.

She inherited the skill of the making tannour and saj bread, just like her peers, from her mother, because rural life required them to meet the needs of their families in the absence of bread in the bakeries, but the craft brought them a source of income after displacement.

Despite the conservative society which usually hinders the work of women, those women insist on continuing their project.

Suleiman refers to her traditional Arab dress, which is recognized in the region, and says that it is evidence of her belonging to her community, but this does not mean that she should stop seeking to secure a decent living for her family.

“The goal that brought us together as female workers in this bakery is much greater than society’s view of us. It is important for us to manage our families’ affairs and to be self-sufficient,” she noted.

“We are four women contributors to the project, and we bring on two others when the work pressure is great,” she said.

She added that their production of saj and tannour bread is improving day after day, so the demand also improves.

Buthayna Asyoud, a female customer, said that the reason for her coming to this bakery is the tasty of the bread, its cleanliness and cheapness.

“The amount of bread we buy here, we cannot buy it from the other bakeries due to the high prices.”

The town of Tel Tamr contains a single public bakery which does not meet the needs of the residents, especially since the area received the IDPs from Ras al-Ayn, despite the fact that the town’s Economic Committee had organized a schedule to distribute bread in the town and its countryside by turns, according to the committee’s official, Deldar Youssef.

The price of a bundle of bread at the public bakery is 125 Syrian pounds, and the subsidized bread is 500 pounds, while a loaf of bread from the stone and tannour bakeries costs 150 pounds.

However, the Tel Tamr Tannour Association project sells each loaf of bread for just 100 pounds, which prompted the residents to call it the Poor People’s Bakery.

Unlike other bakeries, this bakery does not sell its bread to restaurants, but it keeps opening to meet the needs of the residents and families, according to those in charge.

Asyoud, expresses her admiration for the idea of the women’s project in light of the living conditions in the town and in the area as a whole.

She aspires to work as well, like other female workers, but she has not obtained a job opportunity that suits her preferences and capabilities yet.

Few months ago, the Department of Cooperative Associations of the Economic Committee of Tel Tamer announced its support for small projects in the region.

The Tel Tamr Tannour Association project and a sewing workshop project were among the projects that received the committee’s support, where the Economic Committee supports the small bakery with 650 kg of flour per month.

The female workers share the profits they make every day, and they send five percent of the profits to the Economic Committee every month, which says it allocates it to support other small projects in the town.

Suleiman who supervises the work in the bakery, explains that they can provide cheap bread because of the Economic Committee’s support for them, with flour and diesel at reduced prices.

However, she says that the received amount of flour is not enough for the bakery’s customers, “If the support was better than the current one, we could sell at a cheaper price, but we are forced to buy a quantity of flour from the market at a high price at the end of the month.”

The IDPs women project needs an electricity generator to run the kneading machine, “due to the frequent power cuts, and sometimes the increased demand, we need an additional amount of bread dough, but we stop due to the lack of electricity.”

Following the success of their project, the four women aspire to develop their business and open a shop for selling pies in the near future.