Another Syrian refugee living in Germany has been identified as a members of the regime’s militia and responsible for cracking down on protestors reports Zaman Al-Wasl. 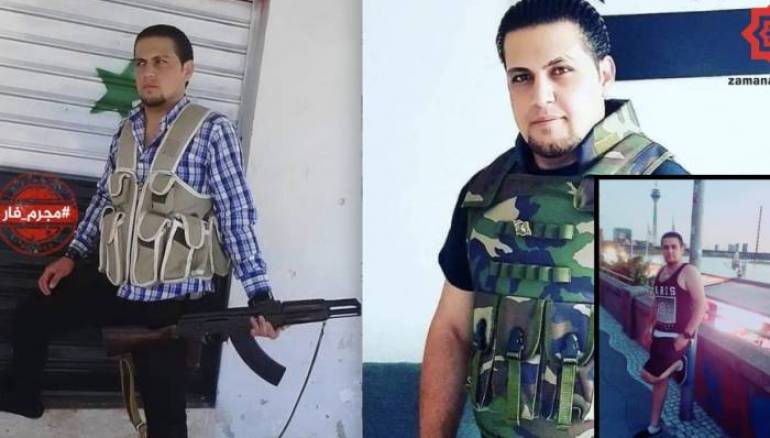 Zaman Al-Wasl has obtained documents revealing the identity of a pro-Bashar al-Assad militant and security agent who applied for asylum in Germany after participating in cracking down on Syrian activists and leading most of them behind bars.

Tariq Hassan Alour, originally from southern Quneitra province, has been living as a refugee in Mönchengladbach city since 2015.

German politician seeks to hold Syrian ‘war criminals’ accountable, and urge refugees to report to the authorities, those that they suspect.

According to a Zaman Al-Wasl source who is willing to testify in court, Alour was an agent in the Intelligence 220th Branch in Sasa town with his father and uncles. They arrested of dozens of Quneitra protesters, many of whom were either disappeared, detained, or passed away under torture.

Alour was part of the raids, arrest operations and military checkpoints in the region, especially Khan Arnaba, al-Saqri, al-Sahraa checkpoints, as well as non-permanent barriers set by regime intelligence to ambush civilians.

According to the source, Alour has exploited the refugees in Germany and a few other European countries, procuring identity documents – especially passports that he acquired from intelligence branches, in exchange for large amounts of money. He has also worked in transferring money illegally to Syria, which allowed him to buy lands and real estate in his village.

The source added that Alour has helped coordinate and organize pro-regime marches in Germany. Zaman Al-Wasl has obtained videos showing him at the head of the procession calling for loyalty to Assad and condemning the opposition.

According to our sources, Tariq’s father works as a security guard in the Directorate of Finance, where he has a great deal of authority due to his close relations with a large number of military and security officers, even before the revolution. He previously worked as a driver for a member of the People’s Assembly. The source added that Tariq’s uncle, one of the leaders of the shabiha militias of the Sasaa branch, and was awarded an honorary military rank due to his great loyalty to the regime and the officers of the branch.

Although German law prohibits refugees from visiting their mother country, a few months ago, Alour entered Syria through Lebanon with the assistance of his father and uncle, without passport stamps to avoid losing his asylum status.

In Germany, the Crimes Against International Law Act applies in cases of serious international crimes, such as genocide, war crimes, and crimes against humanity, regardless of the nationality of the suspect, or the place where the crime was committed. This applies against Alour who officially resides in Germany.

Zaman Al-Wasl thanks all witnesses and individuals who interacted with our initiative, providing us with evidence and information that will help us continue looking into these criminals and building files against them. And we urge everyone who has any relevant information or evidence to contact us with guaranteed confidentiality and discretion.