Abdel Basat al-Sarout embodied the early ideas of the revolution and his tragic death has caused much sadness among those still fighting the regime writes Daraj. 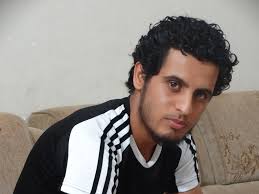 Abdel Basat al-Sarout may be the one man who most embodies the path of the Syrian revolution in its splendor, its spontaneity, its pleasures, its twists and finally its tragic ending.

A former goalkeeper for the Homs-based al-Karameh club and the Syrian national youth team, he was born in 1992 in the al-Bayada district, which is mostly inhabited by migrants to Homs city from the countryside and Bedouins, as in Baba Amr, who were nomads before settling in Syria’s third-largest city. The Syrian revolution came and Sarout, with his established popularity and his hoarse, melodious voice, guided the protesters and set soaring an eagle over the shoulders of his supporters, who had clapped and cheered as he saved goals on the soccer pitch. They chanted for him and with him for freedom and justice and the fall of the regime. The peaceful revolution lived in the squares and were guided by the crowds and for a moment mirrored the ideas of the deceased artist Fadwa Suleiman, of Alawite descent and secular views, who at the time was a symbol in some songs and writings on the walls that called for the combatting of sectarianism and defending the imagined national unity. It should be said here, that it was imagined honestly and sincerely and perhaps with some fear of discovering a terrible loss.

“He wants the whole world to be his slave … we aren’t slaves to anyone but God.”

With this sentence, Sarout summarized the beginning of his revolt against Bashar al-Assad in the documentary film, “Waer,” which was filmed in the first months of the revolution—days when Homs became the capital for peaceful mobilization and the daily protests, citizenship journalism and the beginning of the armed confrontations between the protectors of the protests and the regime’s shabiha. In the early days of the revolution phrases about dignity and freedom or “death rather than humiliation” were often repeated.

With his spontaneity, Sarout expressed the mood of those who refused to submit to indignity and gave testimony to the ignominy and the commitment to “modern” values of freedom and dignity of the individual. It was perhaps in this mix specifically that there was something like the meaning of the popular uprising in Syria and the pouring of the masses onto the streets and squares, despite the bullets, arrests, torture and the executions in the streets and the memory of fear. The tekbeer mixed with the chants for freedom, united men and women of various backgrounds and generations—even if most of them were from poorer environments. They carried a shield of metaphysical protection to confront the killing, and yearned for future liberation from the weight of a dictatorship that was older in Syria than most of the protesters and demonstrators.

After becoming a symbol of the revolution and supporter of the al-Khalidiyeh sit-in and those in other districts of “liberated” Homs by night, there were songs made to Abdel Basat al-Sarout, or hymns that did not resemble the classic revolutionary chants, even if they did perform the function of mobilization and incitement. When Sarout sang in protests or in closed rooms “Oh, country, precious country,” in his hoarse voice with his deep sadness, he recounted successive popular upheavals and crackdowns and tricks to confront the fire and knives and boots, from Daraa to Homs, extending to all corners of the Syrian map, and villages many of which Syrians themselves had not known the names of. He did so spontaneously, simply and automatically and with his performance of “Paradise, Paradise,” turned into an expression of clinging to the beloved country, even if it meant “fire” on one hand, and on his regret for the lack of uprising, or the “fear” of Hama after 1982 (“Oh Hama, forgive us. We owe you something”) and the regret here means a lot. The Syrian revolution in 2011, like most of the Arab revolutions, seemed in some of its aspects to be searching for lost time—time stolen by the ruling regimes. The ages were stolen from those who lived and inherited by those who had not yet been born, like Sarout, into a political lifelessness and publicly degradation generalized to a whole society. After apologizing to Hama he called for revenge for the city in the name of two generations who are revolting against a history that helped build dictatorship and the walls of fear in Assad’s Syria, for which Hama was crucified and so that others can learn a lesson.

Then came the siege of the rebellious districts in Homs, after a large portion of peaceful protesters had taken up arms to defend their lives and their families against the regime’s escalation of its oppression, and sending tanks to confront people staging sit-ins and bombarding its gatherings and carrying out massacres against them. Sarout lost much in the killings, although he personally survived them twice. The loss of his friends followed one after the other. He lost his uncle, and then in stages he lost his four brothers. The young man, still in his 20s, moved from songs in the squares to killing and singing inside pale houses with resting fighters or those passing by in solidarity, or journalists covering their city’s revolution. Perhaps his song, “We stand steadfast, our country, steadfast despite the injustice of the oppressors”—expressed most of the attributes of the new stage that Homs was undergoing after being strangled by shelling and isolated from the world. Its defense was carried out by young men motivated by the binaries of determination and despair, in an attempt to search for solidarity and resistance to fear in the mosques or in the armed units or in what remained of the internet networks and phone lines, to secure some belief in life outside the darkness of the blockade—or rather, in all of these.

During this stage, Sarout founded the Martyrs of Bayada Brigade, some of whose daily activities under the siege and in battle were discussed in the film “Return to Homs.” The brigade’s fate was tragic, as most of its fighters died during the battle to break the siege on some of the city’s districts, which fell months later to the regime and its allies.

If time passed intensively in a narrow geographical space in Sarout’s journey, then it appeared disjointed after he left for Idleb, which was marked by a monotonous wait for death and sometimes new displacements.

Sarout left Homs in 2014, and left behind him wreckage, hopes, lives and graves. After some time, he started to make sectarian statements and take photos with black banners and recordings with jihadist terms. Some said that he had given allegiance to Baghdadi’s caliphate after becoming briefly close with the al-Nusra Front. The man then disappeared and talk of him grew rare with the exception of news on his arrest by al-Nusra. Then on the anniversary of the revolution in March 2018 he appeared with a new song, chanting and singing among crowds in Idleb holding the revolutionary flag—along with all it meant to raise this challenge in light of the current conflict between the green flag of the revolution and the black banners that were torn down, shredded and banned.

When Sarout joined Jaish al-Izza as a commander, he most likely wanted to return to his initial path, and to join its positions in the northern Hama countryside, the nearest point outside the regime, Russia and Iran’s occupation of his city and to his shredded dreams. There he fought and died at the age of 27, and ended his tragic story.