Zeitoun reports on the condition of IDP camps in Syria's north, as civilians are forced to endure a new winter without proper facilities for warmth, education and sanitation 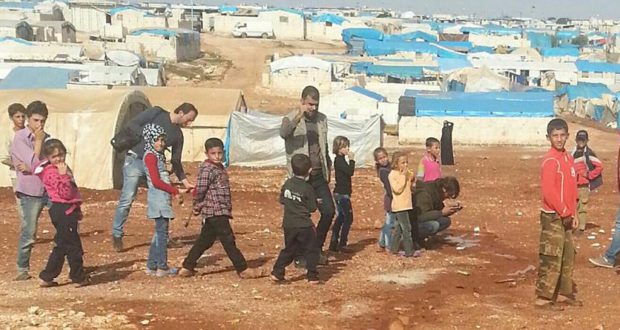 The past years have been a good witness to the sufferings of Syrians displaced in the camps, as shown by the tragedies and disasters which have been recorded. Now a new winter arrives, carrying with it a great deal of suffering and oppression, as well as countless stories of life or death in Syria. Here in the camps, a child lying on his mattress may wake in the morning drowning in rainwater — or perhaps the storms uprooted his tent before the next day’s morning arrives. Before adults, children live through a conflict of a different kind — the conflict of cold and heat, hope and despair. Hope that their tragedy will end and they can live a calm, dignified life like the rest of the world’s people if the current situation continues, especially in light of daily shortages in the camps.

With the first rainstorm to hit last October, Zeitoun saw the conditions of more than 21 tents in a camp in northern Syria, where about 170,000 people were living, and spoke with residents and administrators on the situation in the tents, their needs, and how the people were suffering and what they were asking for.

The sewage problem and rugged roads

Mahmoud Rajab, a resident of the southern sector of the Atmeh camp (on the Turkish border) told Zeitoun: “All the roads in the camp filled up with sewage after the people began emptying their tents’ waste into the roads. This has led to daily accidents and has forced most people to pass over these polluted streams — and all this is in addition to the diseases and pestilence this has caused for our children and will continue to cause if the situation persists.”

He added: “The price the organization imposes monthly to remove the sewage from the septic tank is enough over four months to extend the sewage network to the whole camp, and thereby solve the problem.” He said that the sewage problem threatened the population because of the risk to their health.

Aqil Hussein, a student in the second grade in the Al-Hikmeh school in the Atmeh camp, says: “I hope to go back to my village to study. The road to my new school is rough and I have a hard time getting there. Most days I arrive in clothes stained with mud and dirt, and so I don’t really like to go.”

Kenana Arfat, one of the camp workers and a water tank driver, said that “the sewage problem has become one of the biggest problems which the camps face, since the flooding of the septic tanks caused their water to spill onto the roads. This is in addition to the roads being very rough, which leads to accidents.”

He added: “We asked for the organization supporting the sewage project to increase the number of times the septic tanks are emptied, but there are still not many and they are unable to meet the needs.”

Abdel Jabar Khalil, the camp manager at the Al-Banyan al-Marsous camp in northern Jisr al-Shughour, told Zeitoun that “the roads in the camp became even rougher after mid-November, and, with the support of the Al-Banyan al-Marsous association, we started a program to prepare the roads and resurface them. It’s a program of utmost importance, especially since winter began. The project will include all the main roads and side roads in the camp.”

Zeitoun’s correspondent, who visited the camps in the north, said: “The problem of the rough roads, which has been improved in the Al-Banyan al-Marsous camp, is still a problem which more than 100 other camps are suffering from. It is one camp among all these camps — not to mention the sewage problem on the camp roads, which has caused daily problems and health risks for the people.”

In addition to the poor condition of the roads and children who are forced to cross mud puddles of sewage on their way to school, a number of other problems confront students in the camps, most of all the lack of centralization of schools. This forces students to travel great distances on order to attend class. Further issues include a lack of available heating and the severe lack of textbooks and monthly salaries for the teachers and other workers.

Fatima Khanous, a primary school student, told Zeitoun: “I’m afraid the cold will prevent me from going to school, especially since it’s far from my tent, and I always arrive freezing from the cold, and wet with mud and dirt from the roads. I’m still waiting to be able to buy an umbrella ahead of the rain.”

A member of the administration council in the Atmeh camp, Ahmed al-Omar, said: “In the education sector inside the camp we’re limited to the most basic elements of the educational process. We couldn’t secure textbooks and a large number of teachers are teaching as volunteers and haven’t had salaries for more than a year. We are without heaters — the schools have none at all.” He said that the NGOs were content to take statistics and information, and that was it.

Problem of aid and readiness for the winter season

Ahmed says that the last two years have seen a drop in aid regarding winter clothing, blankets, and children’s milk, and that may place a burden on the shoulders of poor families that cannot secure them on their own.

He added: “The material support is being reversed before any project regarding the people, and all that we can do is communicate with the NGOs and the concerned bodies and give information and statistics, and perhaps the outcome will come out in their [the needy] favor.”

Camp shortages… Problem of Syrian and Iraqi families are alike

Ahmed explained that the shortage of tents is at the top of the camp’s needs, adding: “As families are arriving to the camps daily amid the large waves of displacement, they are forced to shelter temporarily in community shelters like mosques and such until they can find additional quantities. The amount of water is also very limited in the camps.”

The director of the Al-Banyan al-Marsous camp, Abdel Jabar Khalil, said: “The need for tents has increased with the wave of displacement, and so far we have not been able to secure the necessary number of tents.” He added: “This is the same suffering endured by the Iraqi families who arrived to the Al-Omar camp in November, who still have not secured housing and are now living in the camp mosques.” He said that the number of Iraqi families heading to the camp was 15.

While reporting on the condition of camps in the north, Zeitoun was able, through its sources, to obtain precise statistics relating to the damage and needs of the camps regarding tents and the rooms which have recently been set up, with the list of essentials headed by the need for insulation from the rain, in addition to the need for paved roads and road repair.

According to the statistics, there around 3,994 tents totally unfit for living in which need to be completely replaced, and more than 3,849 in need of repair, varying from one tent to another. There are more than 8,529 tents and 2,840 rooms in need of insulation from the rain. There are also 124 camps needing pavement and repair of their dirt roads, which have turned into mud roads surrounded by pools of water, as well as repairs to their sewage systems, which have forced the residents to pass through sewage daily — especially school students.