Since the start of the war, thousands of Syrians have been murdered in regime prisons writes Al-Araby al-Jadeed 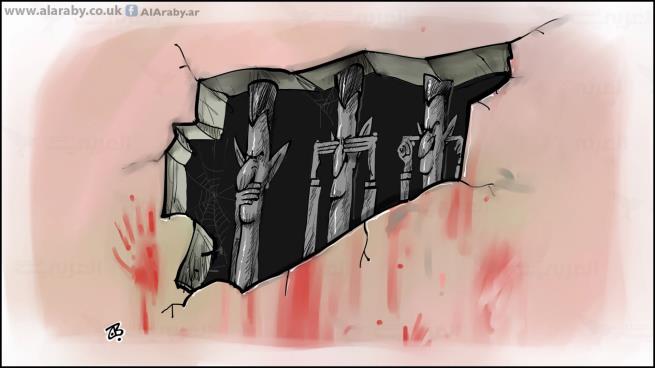 Dozens, if not hundreds, of families are shocked daily by the news of the death of their children in the prisons of the Assad regime — either by being informed directly by the intelligence agencies, or discovering this when they receive papers from the Civil Registry departments. Sometimes they are even informed by a member of the relevant departments.

Syria is drowning in a flood of names of martyrs who have died under torture. Silently, far from the eyes of the media, the massacre of tens of thousands of prisoners has been carried out over the past seven years. Estimates indicate that the number of prisoners who are known to have been disappeared exceeds 200,000. The number of people who have disappeared, without the acknowledgement from the Assad regime, is similar in size.

The death reports issued by Assad’s intelligence services attribute the deaths of prisoners to heart attacks, unconcerned that this shaky pretense will be exposed. Heart attacks, as a cause of death, does not provoke many questions with the families. The regime could not claim that tens of thousands of prisoners have committed suicide in their prisons, due to their sense of guilt, and they cannot reveal the true cause of the deaths — severe torture or intentional killing.

But who are these people that Assad’s agencies insist on sending to their deaths without mercy? And how can a regime that says it is winning kill young men? And what about the political solution which the head of the regime claims has now become possible?

Those looking for their identity will find that they are mostly elements of the civilian revolution: secondary and university students, writers, photographers, activists, educational staff, those with leftists and liberal ideas, and even those who have no political affiliation but an emancipatory culture, as well as social and cultural activists who have the ability to express themselves through revolutionary mobilization and describe the regime’s crimes. These people appeared on the first day of the revolution after their capabilities and energies had been confined to their imaginations and hearts, and the revolution became a great platform to display these capabilities.

The killing of activists in Assad’s prisons is not isolated from all the other measures the regime took to kill the revolution. Only a few months after the outbreak of the revolution, the Assad regime issued a list of a million people wanted by the intelligence agencies. At that time, weapons had not appeared in the hands of activists or protesters. But those million knew what their fate would be if they were arrested, and so they decided to go into hiding or to flee the country. Later it was revealed that the regime had intentionally leaked the list to put an end to the apparatus of the revolution.

The issue of killing prisoners is part of the bigger plan to entirely eliminate a generation which put the revolution in motion, regardless of whether they were directly involved, or even if they were proven to have not participated in the revolution. The reader may see this as an exaggeration, but the madness of the Assad regime and its stupidity did prompt it to think like this, and to implement this thinking in practice. As evidence, it placed every person between the ages of 20 and 40 on a list of wanted people, and if it didn’t put them on the front lines, it threw them in prison on suspicious pretexts.

The course of events in Syria shows that the Assad regime will continue the war against the Syrian people in the long term. Even if the front lines quiet down and the artillery falls silent, there is still danger, because the killing machine will not stop. The Assad regime has evaluated that these conditions are based on a fact they must exploit as much as possible. The eye of the world has turned away, and the curtain has been lowered on Syria. Syrian society is weak and divided to the furthest extent, and the opportunity to practice brutality in its ugliest form is ripe.

Among the worst tragedies which Syrians face is the killings of prisoners. The families of prisoners die dozens of times. They live in fear, clinging to hope, despite the intermittent signs, only to be given the news of their children’s death, like a sudden slap. It is as if Assad’s gangs are telling them: They died collectively of heart attacks. We killed your children by strangling and cutting and dragging. We have been satisfied by their deaths, and have taken revenge on you for raising these ingrates.

Bashar al-Assad is not some knight of nobility who pardons his opponents when he is in a position of power. He is not someone who stirred up politics and rose to his position through his own efforts. Those who knew him when he was summoned from London after the death of his brother Bassel, the first heir to Hafez al-Assad, remember that the leaders of the intelligence agencies were tasked with teaching him the ABCs of governing — and these people consider all Syrians to be traitors and conspirators as long as they live and breath. They see them as nothing but a burden to be borne, and the best policy is to whip them until their time comes, and the best of them can leave early and relax.