Luna al-Shibl has had a meteoric rise to prominence, from journalist at Al Jazeera to Assad’s Press Officer, but has also come into direct conflict with Assad's wife. 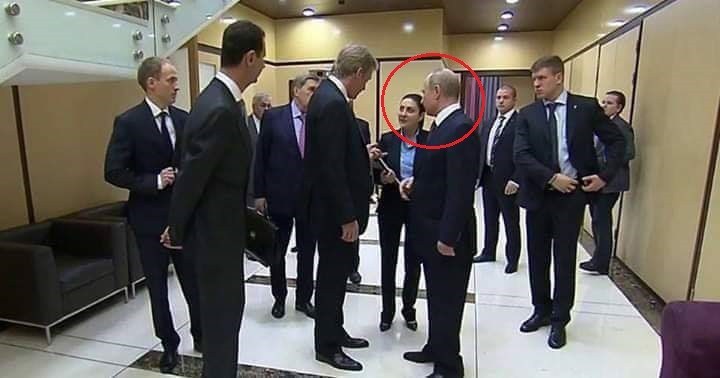 In March 2019, a picture was leaked showing President Bashar al-Assad in an awkward situation. In the photo, Russian President Vladimir Putin, was ignoring Assad and talking to a woman. Many wondered who that woman was. She was Assad’s Press Officer Luna al-Shibl, who played a key role in the political decisions made by Bashar al-Assad.

In May 2010, five anchorwomen resigned from the Al-Jazeera news network after being accused of not dressing modestly enough. The anchorwomen were three Lebanese women (Joumana Nammour, Lina Zahr al-Din, and Jullinar Mousa), one Tunisian (Nawfar Afli), and one Syrian, named Luna al-Shibl.

Luna returned to Syria and soon after the beginning of Syrian revolution, she quickly climbed the ladder of power and sit in the office of the president as a Press Officer, before the spotlight rested on her as rumors began.

Luna al-Shibl was born in 1975 and is a Druze from Suweida. She completed a master’s degree in journalism and media and worked briefly on Syrian television. She presented herself well and demonstrated a strong character, which convinced the Qatari Al-Jazeera Network to take her on in 2003, when she was only in her late twenties. She shined in her program Lilnisaa Faqat (For Women Only) and conducted a number of interviews and presented live coverage, particularly during the 2006 war between Israel and Hezbollah.

Soon after she returned home, the Arab Spring began and stretched to Syria. She returned to work for Syrian TV as an anchor and political analyst. She immediately positioned herself in the pro-Assad loyalist camp and got quick promotions, occupying the second highest media post in the Presidential palace as Assad’s press officer, next only to President’s Political and Media Adviser, Bouthaina Shabaan as media.

The President and the Adviser

Shibl managed to win President Bashar al-Assad to her side. Active as she is, she extended her mandate beyond media. In addition to the media reports she presented to Assad she had an opinion on a range of other different areas. She reportedly met with Assad on a daily basis to discuss media and other reports even in areas outside her expertise, such as security, military and the economy.

Shibl built on her relationship with Assad, and through her daily interactions, she achieved further gains in her career, forming a coalition to oppose another one that combatted her, led by the President’s Political and Media Adviser, Bouthaina Shaaban. Her alliance was supported by the power security man Ali Mamlouk and Information Minister Imad Sarah, while the later alliance was supported by then head of the Air Force Intelligence Branch, Jamil al-Hassan, Prime Minister Imad Khamis and leaders of the security branches loyal to Iran.

A report published by a Syrian website (sasapost.com) claimed that international media could only access the President through Luna al-Shibl. Additionally, Luna was the person who suggested that certain MPs issue a video or written statement rejecting the Arab League’s statements, for example. She also arranged the visits made by the President to certain Syrian regions with the crowds ready to receive him, as had happened in Baba Amr in Homs or in Ghouta.

Luna repeatedly clashed with field commanders for meddling in military and security decisions beyond her control, all with Assad’s blessing.

Well informed sources told Al-Hal, a Syrian opposition website that Assad was convinced of everything Luna says, and put his absolute confidence in her, to the extent that he sought her advice on all issues including the relationship with the main actors in the region.

The Lady of the palace

Her relationship with Assad, however, was not replicated with the President’s wife, Asma. Reports say that there was a kind of jealousy between the two women. Asma repeatedly pressed her husband to clarify the nature of the relationship between him and Luna.

In January 2017, reports went viral that Luna was fired from her job following direct orders from Asma al-Assad after she felt that Luna posed a danger on her husband. Renowned opposition activists and media figures such as Faisal al-Qassem of Al-Jazeera and Musa al-Omar published such reports.

However, Shibl appeared later at a seminar at the University of Damascus. Still, none of the staff in the Presidential Palace denied the apparent disagreement between Luna and Asma.

Luna divorced her husband, Lebanese journalist Sami Kleib after four years of marriage. They both met when they were working at Al-Jazeera. They officially broke up in 2014, after their undeclared separation more than a year earlier.

Kleib, who works for Al-Mayadeen TV, continued traveling between Beirut and Paris, and by virtue of her work, Luna lived in Damascus.

Shortly after her separation, she got married to Ammar Saati, the head of the pro-government Student’s Federation, a man whose influence goes beyond his office, which he has held for many years.

Her marriage with Saati prompted a roar among the elders of the city of Suweida. It is very rare that a Druze woman marries a man from a different religion. The political marriage was most evident between the Damascene husband and his Druze partner.

The wedding was small and attended by a number of officials, most notably the Grand Mufti Badr Eddine Hassoun.

In January 2014, she emerged as a member of the delegation representing the Syrian regime participating in the Geneva-2 conference. She played the role of the delegation spokesperson unofficially and was quoted several times by the regime’s news agency SANA.