Talal Dakkak became known for his brutal acts, including feeding people to lions, but has now become a powerful business figure in Hama. 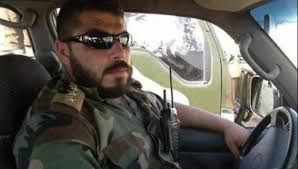 Talal Dakkak, a former militia leader, shifted from crime to business after Russia decided to dissolve the regime’s militias in Hama and absorb them into the Fifth Corps. After years of criminal acts, including kidnapping, killing, organ trade, and feeding humans to his lions, Dakkak became one of the most powerful businessmen in the region of Hama.

We do not know much about Talal Dakkak before the revolution. According to Syrian sources, he was a construction worker and sometimes drove a cab. He certainly took care of his body and was a muscular tall man when he attracted the attention Suhail al-Hassan, the commander of the Tiger Forces, after the latter entered the city of Hama towards the end of July 2011 following largescale protests in that city.

At one point during the Syrian war, Talal Dakkak, nicknamed “Abu Sakhr,” led a militia of more than 1,500 men recruited by Air Force Intelligence (AFI).

During his time as a militia leader he accumulated a fortune by monopolizing the smuggling of fuel from the city of Hama to Idlib and its countryside as well as the smuggling of foodstuffs from and to the north of Syria. Dakkak also smuggled unregistered vehicles and sold them with AFI plate numbers and dealt in the trade of narcotics.

In Hama, Dakkak would regularly arrest civilians and release them in exchange for ransoms paid by their families. He focused on the children of well-known businessmen and in certain cases, when families were known to be rich, Dakkak would ask for as much as SYP 20 million, which at today’s rate is equivalent to around $35,000.

Lion as a pet

A leaked document from the Hama branch of the Military Intelligence Directorate (MID) obtained by the al-Souria website indicates that Dakkak is involved in the torture of detainees and abductees and in feeding his lion with the bodies of these people after killing them.

According to Document No. 11201 of 11 September 2015, which was seen by al-Souria, a source at the Hama military airport informed the MID branch that Dakkak was raising a lion cub, which he stole from a zoo. The document adds that Dakkak fed this cub with the meat of the abductees whom he or one of his aides had tortured and killed.

According to the document, Dakkak was proud of his deeds and not worried that they get known. He was heard as saying that he had cut the flesh of “terrorists” while alive and offered it to his lion cub. In addition, a video of Dakkak feeding his lion cub with a live horse went viral on social media.

The document, which carries the seal of the MID, also says that Dakkak has been involved in the trade of human organs that are taken from the bodies of people whom Dakkak killed.

However, time came when Dakkak became more of a liability than an asset and Russia decided to contain and limit his influence.

Dakkak then shifted from crime to more formal business activities. He began to launder his money and get an increasing hold on the economy in the city of Hama and became a partner of the city’s major business figures. To expand his control and protect his wealth from expropriation, Dakkak distributed part of his wealth to his brothers, who began buying agricultural lands and property assets.

Abu Sakhr, as he likes to be called, has become the proud owner of a number of buildings, houses, and farms in and around the city as well as of shares in various investment projects.