With his songs and resistance, Sarout has become a symbol of the Syrian revolution 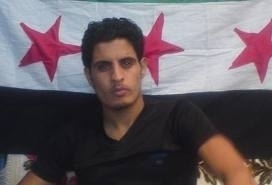 “Abdulbaset! May God protect you,” is a very familiar phrase the protesters used to repeat for a hero whom they had always looked at over the platform of the demonstration. He is Abdulbaset Sarout, the goalkeeper, who turned into a guard for the Syrian revolution.

He is not just a political activist encouraging the people in Homs to demonstrate, he is also one of the icons of the revolution who would chant loudly in the demonstrations of Homs demanding freedom for himself and his oppressed people.

Sarout became a perfect model of a peaceful demonstrator who was turned into a fighter because of the regime's brutality and unresponsiveness to the demonstrators’ demands.

Sarout was the goalkeeper of Al-Karama team, the most famous football club in Homs. He was born in 1992 and gained great fame in the city—especially among children who considered him a supreme sports hero—before later becoming one of the most famous revolutionaries of the city and a symbol for all. He was given many titles, most notably [including] the revolution guard, the nightingale of the revolution, and the icon of the revolution.

Sarout, or Baset as many used to call him, was one of the first public figures who joined the revolution of the Syrian people and chanted many songs demanding freedom and the toppling of Bashar al-Assad’s regime. Thus he was called the nightingale of revolution, which pushed the regime to try to silence him by bombing his house in Al-Bayyada district, which resulted in the death of his brother and uncle. He survived and began to move from one house to another in Homs, then the Syrian regime offered two million Syrian pounds as a financial reward for anyone  who could help in capturing him after the regime’s failed to assassinate him.

The bombing of his house and the killing of his brother and his uncle influenced Sarout’s attitude toward forming new convictions: that the regime only understands the language of violence and, since toppling it will come only through force, he hastened to form the first fighting battalion in the Syrian Revolution which was called the Bayyada Martyrs Battalion, or Al-Sarout Battalion as some would like to call it.

Unfortunately, this battalion was confronted by a large attack from Assad's forces while trying to break the siege on the ancient part of Homs which has lasted for more than 600 days. The attack led to the death of most members of the battalion, though Sarout survived miraculously after being severely wounded and losing two of his brothers. This event encouraged the "Facebook activists” to start a campaign by collecting one million signatures to call the following Friday “the Friday of Abdulbaset Sarout.”

Sarout, the battalion's commander, wrote about the night of the massacre, which bloodied the whole of Homs, [describing it as], "A mass ‘wedding’ for 62 heroes who attained martyrdom in unbelievable conditions, they were carrying on their shoulders 3,000 people in the besieged quarters of Homs, and they were the last hope to lift this damned siege. Heroes! May God have mercy on you, I am sorry for my manhood. It’s hard not to cry.”

Coming back to Homs

The tale of Sarout made him a hot topic for the media, both internationally and in the Arabic media. A documentary was recently presented about him entitled "Coming back to Homs" by director Talal Derki depicting the movements of Sarout and his companions, and documenting the escalating violence by the Syrian regime against the people of Homs, in addition to the decision of the rebels to arm themselves to face this increasing violence. The director and his team risked their lives to transfer the details of what actually happened, as they trained Sarout and his colleagues on the use of the camera. Sarout and his colleagues had photographed their experiences when the director was unable to photograph them himself.

Sarout abandoned his future as a great athlete, lost his home and his family, and then replaced the ball with a gun in his hand, while the kids around Homs keep telling numerous tales about the goalkeeper who turned into the guard of the revolution.