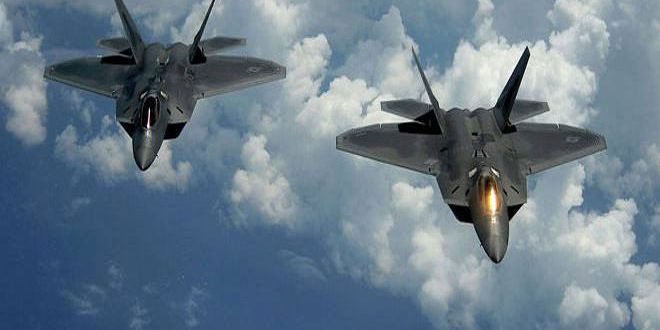 Four members of the Iraqi Popular Mobilization Forces (PMF) were martyred and three others were wounded in an American aerial attack that targeted their positions near the al-Qaim crossing inside Iraqi territory.

A security source at the PMF told SANA’s correspondent in Baghdad that the American occupation forces launched an aerial attack in the early hours of the morning against positions of the PMF near the al-Qaim crossing on the Iraqi-Syrian borders, adding that the aggression resulted in the martyrdom of four PMF fighters and the injury of three others.

Earlier, SANA’s reporter in Deir-ez-Zor had mentioned, quoting civil sources, that what appeared to be American warplanes, attacked residential houses near the Syrian-Iraqi border in al-Boukamal’s countryside with missiles, at about 01:00 am, indicating that the aggression caused, according to the sources, the martyrdom of a child and the injury of 3 civilians, in addition to material damages.

The border area with Iraq in the eastern region has been subjected in previous times to attacks by the American occupation air force, which works to undermine the efforts to eliminate the remnants of Daesh (ISIS) terrorists.

The Iranian Foreign Ministry has stressed that the US aggression against sites in Syria and Iraq is a sign of American arrogance and aims to inflame tension in the region, calling on the new US administration to change its behavior, correct its mistakes, and stop its interventions in the region.

Iranian Foreign Ministry Spokesman Saeed Khatibzadeh said in his weekly press conference that he advises the new US administration to stop this aggressive behavior in the region and not to interfere in the internal affairs of its peoples.

Meanwhile,  Deputy Chairman of the Russian State’s Duma Committee of Defense Affairs, Yuri Shvetkin, has affirmed that the US airstrikes on sites in Syria and Iraq are “an act of aggression.”

Shvetkin told reporters today in Moscow, “I consider that the blatant aggression by the United States is a violation of the principles of the unity and independence of the two countries, Syria and Iraq,” adding, “It only expresses an outrageous interference in their internal affairs.”

The spokesman for the Commander-in-Chief of the Iraqi Armed Forces, Major General Yahya Rasoul has condemned the US aerial aggression on a site inside Iraqi territory, stressing that it constitutes a blatant and unacceptable violation of the country’s sovereignty.

Alsumaria News website quoted Rasoul in a statement on Monday saying that the US attack, which targeted a site on the Iraqi-Syrian borders last night, represents a blatant and unacceptable violation of Iraqi sovereignty and national security, by all international conventions.

Rasoul added that Iraq will carry out the necessary investigations, procedures, and communications at various levels to prevent such violations.