Since tensions have mounted between Turkey and Syria, Turkey has sent a large number of reinforcements to its observation posts in Idleb reports Arabi 21. 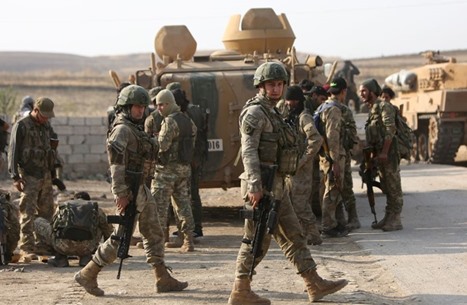 The Turkish newspaper Yeni Safak said that Turkish preparations for launching a military operation against the Syrian regime supported by Russia and Iran have reached a high level.

The report noted that the number of military vehicles shipped to Syria in the past few weeks numbered about 2,000, noting that during just the past two days, about 1,000 vehicles had crossed the border towards the city of Idleb.

It added that Turkish forces had intensified their deployment extensively around the international M5 highway that extends from Hama to Aleppo, as well as the international M4 highway from Lattakia to Aleppo, pointing out that Ankara is continuing its operations against the Syrian regime to remove it from the strategic city of Saraqeb, while reinforcing its military base in Taftanaz in Idleb.

The newspaper said that Turkish forces are on standby, pending orders for the actual attack, while talks between the Russian and Turkish delegation in Ankara have ended with no concrete results.

The paper said that, “the final decision will be issued after an upcoming phone call between Turkish President Recep Tayyip Erdogan and his Russian counterpart, Vladimir Putin,” noting that, “if diplomatic efforts fail completely, the Turkish army will begin operations against Syrian regime targets and Iranian militias on several fronts.”

It added that Turkish forces would push the Syrian regime to the area that reaches towards Aleppo, in order to secure the international M4 and M5 highways and observation points.

Also on Wednesday, the Turkish army strengthened its observation points in the de-escalation zone in Idleb with “commando” members of the special forces.