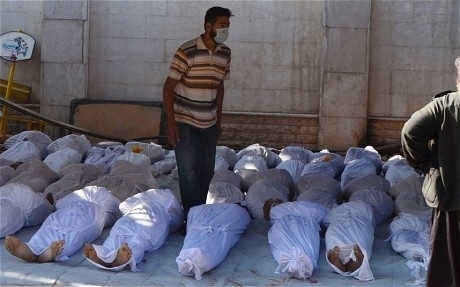 Everything must be immediately done and without any delay by persons with conscious to immediately stop this criminal regime from exterminating civilians. The Mission to Investigate Allegations of the Use of Chemical Weapons in the Syrian Arab Republic, which is currently in Damascus, must demand immediate cessation of the regime’s offensive and unfettered access to Arbin, Ein Tarma, Douma, Kafar Batana, Zamalka and other suburbs of the Eastern Ghouta in Damascus, and Mouadamyah city in western Ghouta, where documented reports indicate that chemical weapons are used by the Syrian regime in the morning of August 21, 2013, causing the extermination of hundreds of civilians including children.

If the Mission is denied access to these towns by the Syrian regime, it must immediately suspend its operations, until these suburbs are urgently and as a matter of priority included in the so called modalities defining its mission. Casualties are mounting by the hour. Regime hostilities must stop immediately. The evidence of the use of Chemical weapons is devastatingly fresh. The failure by the Mission to obtain access immediately to such locations is tantamount to giving a license to the regime to use Chemical Weapons against its population on every scale with total impunity.