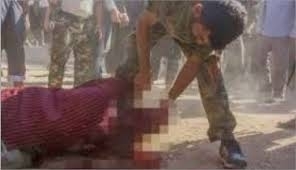 Widespread attacks and sieges on civilian areas in Syria by pro-Government forces are leading to mass casualties, malnutrition and starvation, according to the latest report of the independent international Commission of Inquiry on the Syrian Arab Republic, due to be presented to the Human Rights Council on 18 March.

Fighting around Yarmouk Camp and other areas in Reef Damascus must cease immediately for the supply of humanitarian assistance to reach affected civilians, the Commission said Wednesday.

For the first time, the Commission has also identified specific non-State armed groups that have committed torture as a crime against humanity in Al-Raqqah governorate.

Both pro-Government and non-State armed groups have committed massacres according to the findings.

“The absolute impunity that pervades the conflict, now entering its fourth year, is utterly unacceptable. The leadership of each party must be held responsible for the violations of its members, and must take action to curb these violations,” says Paulo Sérgio Pinheiro, Chair of the Commission, adding that the Commission is updating its confidential list of suspected perpetrators.

The latest report covers investigations conducted from 15 July 2013 to 20 January 2014 and is based on 563 interviews and other collected evidence.

The Commission found that hospitals, medical and humanitarian personnel and cultural property were deliberately targeted, in flagrant disregard of their specially protected status under international law.

The Commission’s investigation into the alleged use of chemical weapons concluded that sarin gas had been used on multiple occasions. The perpetrator could not be determined to the Commission’s standard of proof.

According to the report, the Security Council has failed to take action to end impunity. “Such inaction has provided the space for the proliferation of actors in Syria, each pursuing its own agenda and contributing to the radicalization and escalation of violence.” The report calls on States that exert influence on the parties in Syria to ensure that these parties comply with the rules of international humanitarian law.

It is the 7th report submitted to the Human Rights Council since the Commission began documenting violations of international law inside Syria in August 2011. The Commission has also issued five periodic update reports and two thematic papers. It is the longest running Commission of Inquiry.

The commission, which comprises Mr. Paulo Sérgio Pinheiro (Chair), Ms. Karen Koning AbuZayd, Ms. Carla del Ponte and Mr. Vitit Muntarbhorn, has been mandated by the United Nations Human Rights Council to investigate and record all violations of international human rights law. The Commission has also been tasked with investigating allegations of crimes against humanity and war crimes, and its mandate was recently expanded to include “investigations of all massacres.”

The full report can be found on the following link.

The report is scheduled to be presented on 18 March during an interactive dialogue at the 25th session of the Human Rights Council.

The Commission’s reports are based on interviews of over 2000 people as well as on photographs, video recordings, satellite imagery and forensic and medical records. Reports from Governments and non-Governmental sources, academic analyses, as well as UN reports, also form part of the Commission’s investigations.