Darwish disappeared and appeared again only on June 28, 2015 in the Central Prison of Hama, having lost about 12kg of his weight 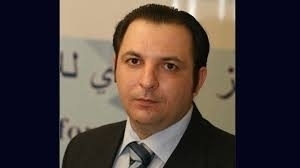 Syrian lawyer and journalist Mazen Darwish, the president of the Syrian Centre for Media and Freedom of Expression is an iconic figure to the country's journalists, human rights defenders, and since 2011, to the peaceful protesters who took to the streets in Syria.

He spoke out forcefully, condemning the use of excessive force against civilians, advocating freedom of expression and the rights of journalists in the country, emphasizing the necessity of peace, the centrality of justice and the equality of all Syrians. And he and his team at the SCM documented the abuses against the civilian population, knowing that doing so would expose them to great risk.

On February 16, 2012, the Air Force intelligence apparatus raided the offices of the SCM in Damascus, closing the surrounding streets, deploying tens of armed operators and detaining the organization's staff, including visitors.

As of last week, Mazen is the only member of SCM that is still in detention.

Mazen was transferred in January 2015 to the central prison of Hama, a city he has no relationship with whatsoever, making it impossible for his wife and lawyers to visit and making every trip he has to make to the court in Damascus a great risk. While overnighting in Adra prison for a court hearing the next day, May 6, 2015, Mazen disappeared and appeared again only on June 28, 2015 in the Central Prison of Hama, having lost about 12kg of his weight. It was later disclosed that he spent those 52 days in a Damascus detention facility of the State Security.

Following the presidential amnesty of July 16, 2015 (22/2015), in which SCM colleagues Hussein Gher and Hani Zaitani were released, Mazen was informed that he would be immediately released based on the amnesty and a relevant judicial decision that reached the prison on the same day. However, the prison guards decided that before the release they had to check if he had been marked as “wanted” again, only to discover a State Security (Branch 285, Damascus) detention order. After three years and five months of detention without conviction of any crime (his trial has been postponed 25 times), Mazen has seemingly been pardoned and released, to be immediately detained again by a security apparatus, in a detention center, practically against the presidential amnesty.

Until now, we are left wondering, where is Mazen Darwish?

Source: Syrian Centre for Media and Freedom of Expression