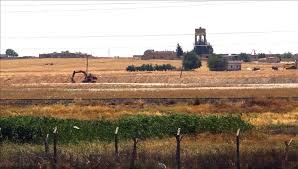 A German official has denied reports that German troops have arrived in Tal Abyad in Raqqa province to join the US-led operation to fight ISIS.

Herman Nicolai, German advisor on Syria at the German embassy in Turkey said in a statement that there "are no German troops on Syrian soil. Nor do German authorities have knowledge of German speaking mercenaries fighting alongside YPG or SDF units."

"The German government advises German nationals against joining any side in any armed conflict as mercenaries," Nicolai added.

Russia's Sputnik news agency had reported that an "unknown number of German and Canadian troops have recently arrived in the northern Syrian town of Tal Abyad in the northern Raqqa province, sources in the Kurdish opposition told Sputnik on Thursday."

"The military service personnel were deployed to the area in the past few days as part of the US-led international operation to defeat [the] Daesh terrorist group," Sputnik added.

Syrian television reported last month that Germany’s commandos had entered Syria to join French and US military forces in their offensive against the Daesh-controlled city of Manbij.

But the German official said, "I would like to clarify this early on, as previous equally false information that German special forces had joined the fight for Manbij on the side of the international coalition was re-broadcast by Syrian state media and still causes confusion in the wider public, although it was denied by the German Ministry for Defence."

All deployments of German troops outside the NATO area have to be authorized by the German national parliament. So you would certainly hear very publicly about such a deployment, Nicolai added.

"As to the claim that Canadian troops have arrived in Tal Abyad to join the ground fight against Daesh I understand from my Canadian colleague that this is also not true," he concluded.