The Nobel Peace Prize nominated White Helmets, responsible for saving over 78,000 lives across Syria, believe that they are targets of the Syrian regime and face torture and execution. Below is the full statement 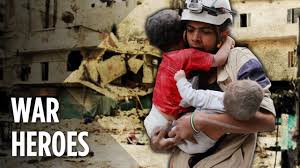 The Nobel Peace Prize-nominated White Helmets, responsible for saving over 78,000 lives across Syria, believe that they are targets of the Syrian regime and face torture and execution should they be captured and detained. The rescue workers state simply: “We hold the ICRC, the United Nations and the Security Council responsible for our lives.”

Below is the full statement:

To the International Committee of the Red Cross (ICRC), the United Nations and the members of the Security Council:

The White Helmets besieged in Aleppo are calling on you provide urgent safe passage for our rescue workers, our families and other humanitarian workers in the city as the Syrian regime takes over the areas where we work.

If we are not evacuated our volunteers face torture and execution in the regime’s detention centres and therefore we need urgent action to save the lives of humanitarians in the besieged part of the city.

We have good reason to fear for our lives. The regime and its allies have falsely claimed many times that our unarmed and impartial rescue workers in the White Helmets are in fact affiliated with radical extremist groups. Our civil defence centres have been targeted and our rescue equipment destroyed. White Helmet volunteers have been purposefully killed in double-tap airstrikes. Hospitals and medical points where doctors and nurses have been working around the clock to save lives have also been targeted repeatedly. Countless White Helmets, doctors, nurses and humanitarians have been targeted and killed in the regime’s cruel assault on Aleppo.

It follows then that when the Syrian regime takes over our neighbourhoods, we will be treated as terrorists and the threat of execution or detention is imminent for all White Helmet volunteers and other humanitarian workers.

We hold the ICRC, the United Nations and the Security Council responsible for our lives and we call on you to secure safe passage for our volunteers to areas outside of the regime’s control. We believe we have less than 48 hours left.

“Whilst the world has failed to protect Syrian civilians, the White Helmets have saved more than 78,000 lives from under the rubble of Assad and Russian bombs. Now the international community must act to save their lives. It is unconscionable that we leave these heroes of humanity to face detention or execution with the fall of Aleppo.”