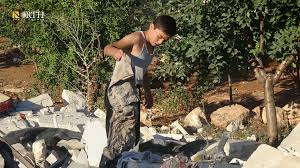 High explosive thermobaric weapons were used three times in a row in the raids against Balshoun outskirts, military sources of the factions told North Press.

The attacks on the western side of the town uprooted trees and partially damaged some adjacent houses.

At the same time, Syrian government forces stationed in the Kafranbel area in Idlib bombarded artillery weapons against the factions’ sites in al-Bara town.