During a meeting of the Non-Aligned Movement, Faisal al-Mekdad met with the heads of several delegations, according to The Syria Times. 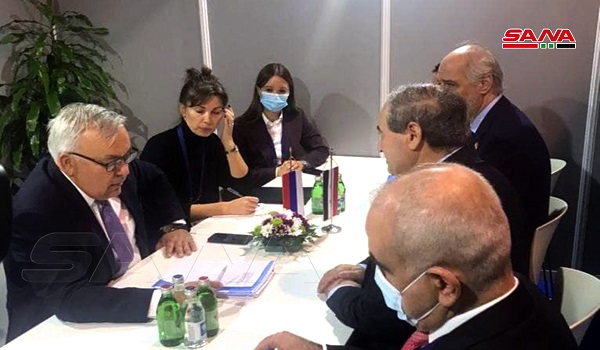 Within the framework of the High ranking meeting of the Non-Aligned Movement (NAM) held in Belgrade marking the organization’s 60th Foundation Anniversary, Minister of Foreign Affairs and Expatriates Faisal al-Mekdad held talks with heads of some delegations participating in this meeting.

Mekdad met the Foreign Minister of Angola Tete Antonio and discussed with him means of enhancing solidarity and coordination between NAM’s member states at multilateral international forums.

The two sides affirmed the need to boost cooperation between Syria and Angola in different fields.

Antonio expressed his country’s solidarity with Syria in its war on terrorism, expressing concern over the spread of terrorism in the African continent.

Mekdad also met with Russia’s Deputy Foreign Minister Sergey Vershnin, with whom he stressed the importance of the achievements made thanks to the Syrian-Russian cooperation in different domains, pointing out that Russia’s participation in the NAM’s Belgrade meeting as an observer strengthens the effectiveness of this movement.

The two sides asserted the need to implement the recommendations agreed on by President Bashar al-Assad and President Vladimir Putin during their recent meeting in Moscow.

In addition, Mekdad’s meeting with Deputy Foreign Minister of South Africa Alvin Botes focused on friendship ties between Syria and South Africa and on reactivating the joint committee for cooperation.

The Syrian top diplomat thanked South Africa for supporting Syria in its war on terrorism during its Security Council’s presidency term, noting the challenges facing Syria due to the Turkish, American, and Israeli occupation and due to the unilateral coercive measures imposed by western countries on the Syrian people.