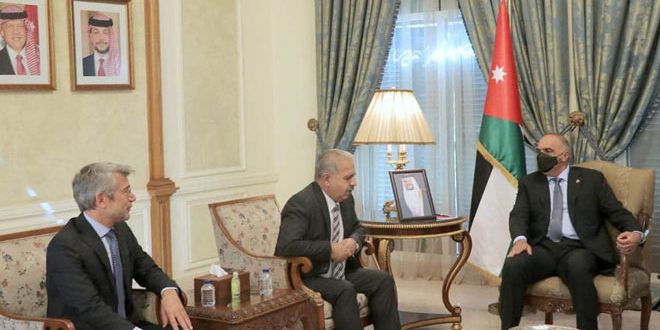 Jordanian Prime Minister Bisher al-Khasawneh has affirmed his keenness on improving cooperation between Jordan, Syria, and Lebanon to serve the interests of the three brotherly countries.

During his meeting with Syria’s Electricity Minister Ghassan al-Zamel and the Lebanese Minister of Energy and Water Resources Walid Fayyad, Khasawneh expressed his country’s readiness to provide the necessary support for Lebanon, according to the Jordanian News Agency Petra.

Talks during the meeting dealt with the steps that are taken to speed up the delivery of Egyptian gas as well as electricity to Lebanon through Jordan and Syria in order to help Lebanon confront its energy crisis.

On a relevant level, the Ministers of Energy and Electricity in Syria, Jordan, and Lebanon agreed Wednesday to set a working plan and timetable for re-operating the existing lines of electrical interconnection between the networks of the three countries.

The Minister of Energy and Mineral Resources in Jordan, Hala Zawati said in a statement following a tripartite meeting in Amman, that the three countries agreed on supplying Lebanon with part of its needs of electrical energy from Jordan via the Syrian electrical network.

The meeting provided a working plan and a timetable for re-operating the electrical interconnection line between Jordan and Syria, conducting all technical studies, and preparing all the agreements needed to implement the supply process, the Jordanian Minister went on saying.

Zawati pointed out that the main goal of the meeting is setting a clear and definite working plan and a timetable for supplying Lebanon with electricity from Jordan through Syria’s electric network, and re-operate the existing lines of electrical interconnection between networks of Jordan, Syria, Lebanon.