The Petroleum and Energy Ministers of Syria, Jordan, Egypt, and Lebanon met on Wednesday in the Jordanian capital Amman, to discuss the transfer of Egyptian gas to Lebanon, according to SANA. 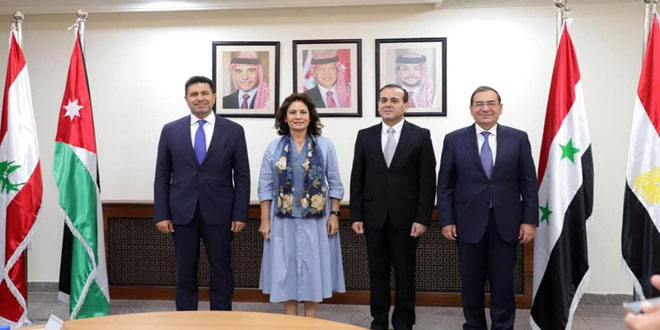 Meeting of Petroleum and Energy Ministers of Syria, Jordan, Egypt, and Lebanon started activities on Wednesday in the Jordanian capital city of Amman.

Read Also: Meeting of Petroleum and Energy Ministers from Syria, Egypt, Lebanon next Wednesday in Amman

The meeting, which is being held at the invitation of the Jordanian Minister of Energy and Mineral Resources, aims to discuss ways to enhance cooperation to transfer Egyptian gas to Lebanon through Jordan and Syria.

A few days ago, Syria agreed on the Lebanese side’s request for assistance in transferring Egyptian gas and Jordanian electricity through Syrian territory to Lebanon, during a session of Syrian-Lebanese talks held in Damascus.