Faisal al-Mekdad reaffirmed the relationship of "deep friendship" and cooperation that bounds Syria and China, during a reception held by the ambassador, according to the Syria Times. 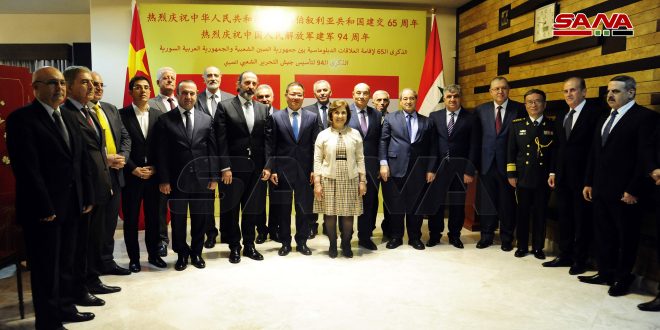 The Embassy of the People’s Republic of China held a reception on the occasion of the 65th anniversary of the establishment of diplomatic ties with Syria and the 94th anniversary of the founding of the People’s Liberation Army of China at the home of the Chinese ambassador in Damascus. In his speech, the Chinese Ambassador to Damascus Fong Biao stressed the need to work to advance the relationship and cooperation between China and Syria, to achieve synergy between the “Belt and Road” initiative and the “Go East” strategy, proposed by President Bashar al-Assad years ago.

The Chinese ambassador said the recent visit of Foreign Minister Wang Yi to Syria sent a clear message to the world that China supports Syria’s sovereignty and territorial integrity and rejects foreign interference in its affairs.

The Ambassador pointed out that the practical cooperation between the armies of the two countries has achieved important and new progress in the fight against terrorism.

In his speech, Foreign Minister Dr. Faisal Mekdad stressed the depth of the relationship of friendship and cooperation between Syria and the People’s Republic of China, which reflects the hopes and aspirations of the peoples of the two countries. Meanwhile, he added, in today’s world, the United States of America and other Western countries are trying to directly harm both China or Syria.

Mekdad also referred to the visit of the Chinese Foreign Minister to Syria. For him, the timing of the meeting points towards the establishment of deeper relations between Syria and China in science, culture, security, and dialogue between civilizations.