Russian Ambassador to the U.S. praised cooperation between the two countries, which helped reach UN resolution 2585 about cross-border humanitarian aid, according to The Syria Times. 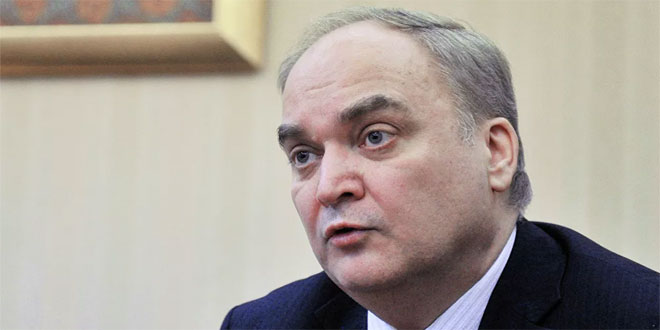 The Russian Ambassador to the U.S. Anatoly Antonov has stressed that cooperation between the United States and Russia regarding Syria “has achieved an important result recently” regarding the Security Council Resolution No. 2585 on extending the mechanism of cross-border humanitarian aid delivery to Syria.

“Thanks to the close interaction between representatives of the Russian and American sides in New York, the Security Council managed to adopt a resolution on a complicated issue that deals with cross-border humanitarian aid supplies to the Syrians,” Antonov said, expressing hope that this resolution “will contribute to achieving an early political settlement that leads to stability in the entire Middle East”.

On Monday, the Russian Foreign Ministry said that the Security Council’s resolution on extending the mechanism of cross-border humanitarian aid delivery to Syria includes several provisions that are important to improve the economic and social situation in Syria.