The Syrian Prime Minister explains that the U.S. and its sanctions are to blame for the suffering of the Syrian people, SANA writes. 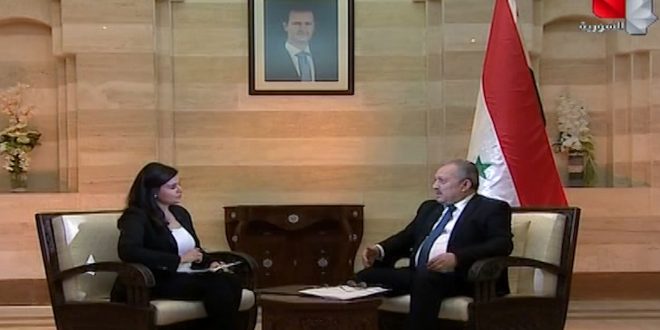 On Tuesday, Prime Minister Hussein Arnous said that the illegitimate coercive economic measures imposed on Syrians by the West are the reason behind their suffering.

In an interview with the national television al-Souriya, the Prime Minister stressed that the subsidy policy is an essential component of the Syrian economy and there will be no change in it, but its forms may vary to ensure that the subsidy reaches its beneficiaries.

“For example, the State subsidizes bread daily with SYP 5 to 6 billion, and it will never withdraw this subsidy but will restructure it to reach the segments that deserve it,” he clarified.

The Premier explained that the government’s recent decision to modify the prices of bread and diesel was one of the difficult decisions that took a long time to study.

Before the war, Arnous said, Syria produced 365 thousand barrels of oil per day, of which it exported 200,000 and consumed 180,000, but today, “due to the control of criminal gangs and the US occupation of oil fields, the State produces in the areas under its control about 18,000 barrels.”

He clarified that the recent increase in the price of diesel has achieved a monthly income of SYP 64 billion while the salary increase costs the state SYP 84 billion.

The Prime Minister denounced that the United States intensified its economic war against Syria, which negatively impacted everything related to the citizen’s needs and explains why the people are suffering.

The so-called “Caesar Act” was not the first of these illegitimate measures nor will it be the last, and it also affects the friends of Syria,” he added.

Regarding the electricity situation, Arnous said that Syria before the war used to generate 9,000 megawatts and reached a stage where it exported electricity to Lebanon and other countries.

But, due to the terrorist attacks, today we have facilities that generate 5,000 megawatts but only 2,300 megawatts are generated due to lack of gas and fuel since the U.S. occupation forces control the oil and gas fields, he reiterated.

“We are a country that has faced a blockade for ten years, and our money is being stolen, and unfortunately today the whole world is silent about wheat and oil being plundered from Syria, but we will remain firm and we will not compromise our sovereignty,” he concluded.