Pro-Turkish factions in Northern Syria are confiscating the property of displaced individuals to use them as military bases, according to The Levant News. 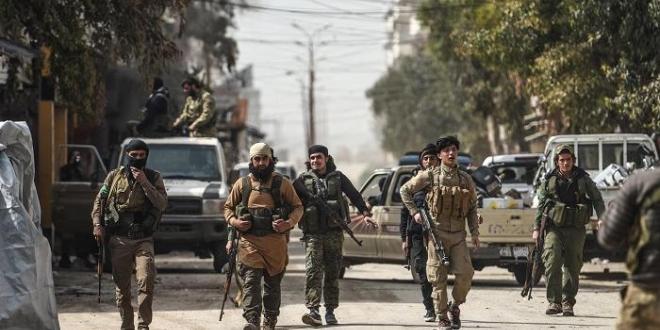 The pro-Turkish al-Hamza Division summoned the mayors of the villages and towns which they control – Ma’arat, Kazeh, Kfardali Fawqani, and Kfardali. The Division demanded the mayors to count the property of the forcibly displaced people from the aforementioned areas, to take full control over them.

According to the Syrian Observatory for Human Rights, local councils controlled by the Turkish intelligence services had ordered that forcibly displaced persons should appoint relatives, who are still present in the Afrin area, to dispose of their property.

About two weeks ago on June 15th, the Syrian Observatory for Human Rights indicated that the pro-Turkish Faction of Suleiman Shah had seized a plot of land in the Sheikh Hadid district of Afrin’s countryside. The land’s area is estimated at 20 dunums and is owned by a resident of Afrin. The faction aims to establish a wedding hall and build houses for displaced people and their families.

Members of the pro-Turkish al-Sham Legion forced families from the town of Tadef in the Aleppo countryside to forcibly evacuate their homes. The properties would be converted into military headquarters, under the pretext of public interest.

A member of the so-called ” Feday’i Baba Omar “, affiliated with the “al-Sham Legion” faction, attacked a citizen for refusing to leave his house in the village. The village is witnessing smuggling operations with regime forces in the area.

After midnight on Tuesday, Turkish forces fired rocket attacks on areas in the villages of Arab Hassan and Um Adasa in the countryside of Manbij.

The axes of al-Dandaniya, al-Yishli, Um Adsa, and other axes within what is known as the Sajur line in the Manbij countryside, also witnessed mutual attacks with machine guns. The attacks were between Turkish forces and factions loyal to them on the one hand, and the Manbij Military Council forces on the other. No information was disclosed regarding the casualties.