The Autonomous Administration of North and East Syria criticized procrastination by countries whose citizens are families of ISIS fighters in the al-Hol Camp, according to North Press. 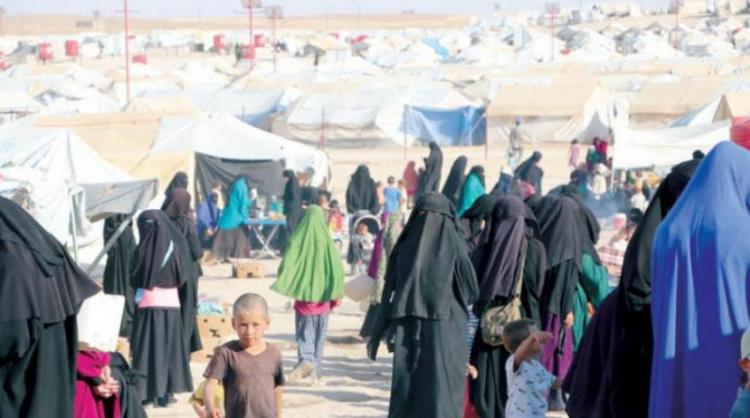 An official in the Autonomous Administration of North and East Syria (AANES) described on Monday as “slow” the response of countries whose citizens are in the al-Hol Camp, northeast Syria.

In fact, the al-Hol Camp includes 64,373 people, 9,544 of which are wives and children of ISIS fighters; this number exceeds the capacity of the camp, which was built hastily during the Gulf War in the 1990s, according to the camp’s administration.

The al-Hol Camp is known to be a ‘ticking time bomb’ due to the presence of ISIS wives and children in addition to tens of thousands of its supporters, who are described as the ‘most dangerous in the world.

The Autonomous Administration of North and East Syria (AANES) has received promises of support to help it manage those residing in the camp and other camps in north and east Syria, Sheikhmous Ahmed, head of the IDPs and Refugees’ Affairs Office, told North Press.

Ahmed pointed out that European countries pledged to find rehabilitation centers for children and women in the al-Hol Camp, but did not specify a timeline for this. Most countries refuse to repatriate their citizens from the camp, for various or even unstated reasons.

Iraqis represent the largest population in the camp, which houses 30,606 Iraqis, according to statistics by the camp’s administration.

AANES and its institutions supervise and run the al-Hol Camp as they secure all services in coordination with organizations operating in it, while the Internal Security Forces carry out security tasks.

Syrian Democratic Forces (SDF) Commander-in-Chief Mazloum Abdi addressed a speech to the meeting of the US-led Global Coalition to Defeat ISIS on the sidelines of the G7 meeting in Rome on Monday.

“To guarantee a sustainable victory, we should not forget about the tens of thousands of women, children, and ISIS fighters who are still in camps and detention centers in north and east Syria,” Abdi stated.

Additionally, Abdi called on the US-led Global Coalition to repatriate those people to their homelands, support education, and ensure their rehabilitation and de-radicalization. In addition, he called for the support of stability and economic recovery in liberated areas to address the root causes of extremism.