Syria's minister of industry met his Iraqi counterpart, hoping that the two countries can bolster cooperation, according to SANA. 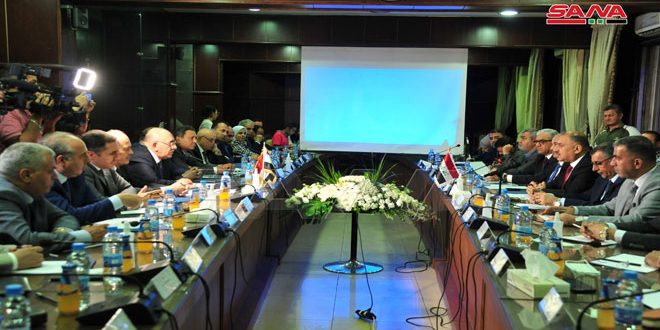 Minister of Industry, Ziad Sabbagh has discussed with his Iraqi counterpart, Manhal Aziz al-Khabbaz means to enhance industrial and economic relations and to establish partnerships in order to uplift the industrial sector in both Syria and Iraq to achieve industrial integration. This would serve the interests of the two brotherly countries.

During the meeting with the Iraqi Minister and the accompanying delegation in Damascus on Wednesday, Minister Sabbagh affirmed the deep roots of the brotherly relations binding the two countries and the necessity to develop industrial cooperation. Sabbagh invited his Iraqi counterpart to work with Ministries and competent authorities in Iraq to lift difficulties facing the export of Syrian products to the Iraqi market.

For his part, the Iraqi Minister said that the visit aims to resolve tackled issues through consensus and to develop joint industries, in addition to expanding trade between the two countries and finding a working mechanism to achieve integration.

The Minister noted that most of the factories in Iraq, especially in the domain of pharmaceutical and textile industries have stopped due to the war, calling on Syrian businessmen and industrialists to work for establishing partnerships with their Iraqi counterparts. He added they could benefit from the Syrian expertise in manufacturing goods and training cadres to upgrade the Iraqi industrial sector and to establish joint factories.

The Chairman of the Syrian Federation of Chambers of Industry, Fares al-Shihabi, affirmed the readiness of Syrian industrialists to work and cooperate with their Iraqi counterparts, and to provide Iraq with high-quality Syrian products, in addition to establishing a joint market to sell Syrian-Iraqi goods.

The two delegations agreed to organize workshops and to form specialized committees from both sides in several fields in order to come up with fruitful results during the days of the visit.

The visit of the Iraqi minister and the accompanying delegation will last several days, and it will include meetings with ministers and the chambers of industry in Damascus and Aleppo, among other activities.