The Russian Foreign Minister accused the US of looting Syria's natural resources to finance separatist groups, according to SANA. 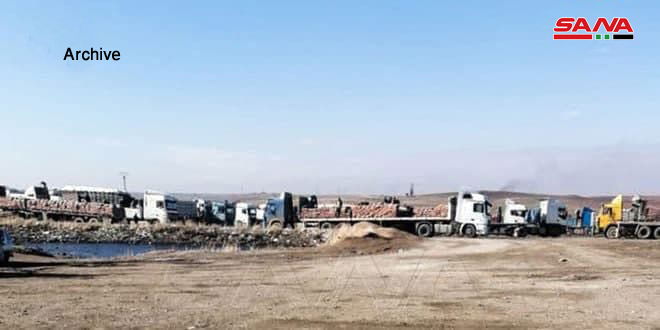 Russian Foreign Minister, Serguei Lavrov said that the US occupation forces continue to plunder Syria’s wealth. Looted money is then channeled to militias in Syria, according to the Russian minister.

The Sputnik News Agency quoted Lavrov, on Wednesday at the Primakov Readings Forum, saying “We always affirm the illegitimacy and the unlawfulness of the US’ presence on the Syrian territories. It is accompanied by exploitation of the country’s natural resources, like oil fields and crops.”

He went on to say that the Americans support separatist groups on the eastern bank of the Euphrates river with the looted money, noting that they play a really dangerous game that may have negative consequences.

In fact, local sources in al-Yarubiya’s countryside told SANA that a convoy of 20 trucks loaded with stolen wheat left the Syrian territory on Tuesday evening heading for northern Iraq through the illegitimate al-Walid crossing.

On a daily basis, the US occupation, in collusion with the militia of the Syrian Democratic Forces, continues plundering and looting the Syrian wealth to transfer it through the illegitimate border crossings in a flagrant violation of international law and UN resolutions.

Minister Lavrov affirmed that Russia will continue to contribute to the resolution of international conflicts, citing for example the Palestinian-Israeli conflict as well as the feud in Nagorno-Karabakh between Armenia and Azerbaijan and the conflicts in Afghanistan and Libya, among others.

On the other hand, Lavrov stressed that sanctions and threats are useless while dealing with Russia, noting that Moscow’s desire for dialogue should not be understood as a weakness.