The most recent report by the Syrian Network for Human Rights records the death of 96 civilians, as well as an acceleration of the spread of COVID-19 in Syria, according to Zaman al-Wasl. 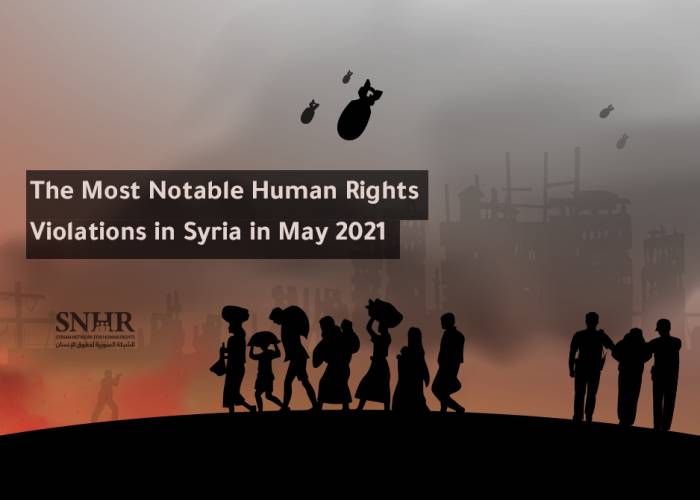 The Syrian Network for Human Rights (SNHR) has issued its monthly report for May, documenting the deaths of 96 civilians, including 15 children and 11 women, and nine people who died as a result of torture.

The report has also recorded at least 162 cases of arbitrary arrest and detention in May at the hands of the parties fighting in the Syrian conflict, including five children, with the largest percentage of these carried out by Syrian regime forces in the provinces of Tartous, Hama, and then Damascus.

In addition to these incidents, the report also documents in May at least seven attacks on vital civilian facilities, one of which was at the hands of Syrian regime forces. The other six were as a result of bombings, but the report was unable to identify their perpetrators.

The report notes that clashes continued in May between the Syrian National Army forces and the Syrian Democratic Forces (SDF) in the villages of Ein Eisa in the northern suburbs of Raqqa, which are under the control of the SDF.

The report additionally reveals that bombings continued in all regions in Syria throughout May, especially in northern and eastern Syria. These bombings were concentrated in the areas of al-Bab, Jarablos, and Afrin in the suburbs of Aleppo, and Ras al Ein in the northwestern suburbs of Hasaka. The report adds that mines also continue to claim a large number of civilian lives across Syria. In May, the SNHR documented the deaths of nine civilians due to mines, including four children.

The report further reveals that May saw a significant increase in the number of infection cases with COVID-19 compared to previous months in all Syrian regions, with the regime’s Ministry of Health in May officially announcing 1,762 new cases and 178 deaths.

In northwestern Syria, more infections and deaths due to coronavirus were recorded in May, with the Early Warning Alert and Response Network (EWARN) announcing 1,558 new infections and 17 deaths related to COVID-19, the highest monthly results announced since the beginning of 2021.

In Northeastern Syria, a total of 2,024 cases of infection and 151 deaths were recorded in May, according to the Health Authority in the Autonomous Region.