Hussein Makhlouf has said that a number of service projects have been completed across the country, which aim to allow for the return of refugees writes Al-Watan. 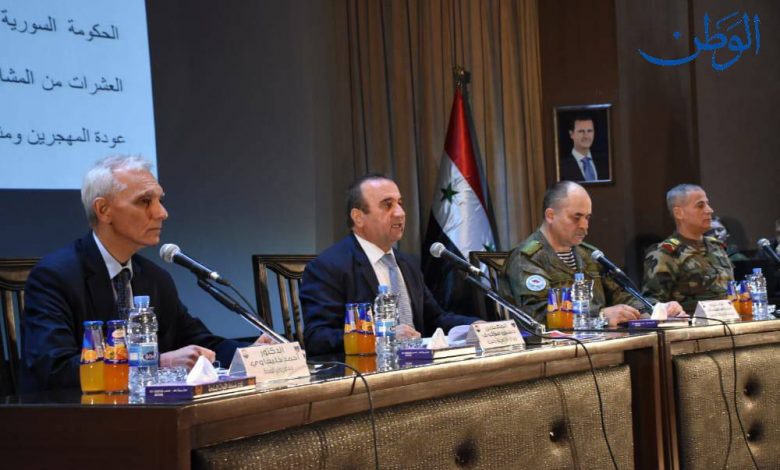 The Minister of Local Administration and Environment, Hussein Makhlouf, confirmed that despite the unilateral coercive measures imposed by the US and its allies on the Syrian people, the Syrian government has, since the beginning of this month, completed dozens of service projects in various governorates. The projects will contribute to facilitating the return of the displaced.

During the joint Syrian-Russian press conference held in Damascus on Thursday, Makhlouf said that thousands of refugees continue to return from Jordan and Lebanon, as well as tens of thousands of internally displaced persons, as the state seeks to gradually facilitate their return to the Yarmouk camp in Damascus, in parallel with the rehabilitation of the infrastructure. He said that efforts are being put in place to facilitate the return of the displaced to Wadi Barada, Basimah, and Ayn al-Fijah in the Damascus countryside, while restoring the infrastructure there.

Makhlouf pointed out that terrorist groups are tightening their siege on Syrians in the camps in Idleb and have been preventing them from crossing to the liberated side, despite the great preparations made by the Syrian state to receive people by opening the crossings, which proves that any allegations are nothing but hypocrisy, lies, and slander. He proceeded to say that the allegations are aimed to divert attention from the terrorist Erdoganian/Muslim Brotherhood’s ambitions, which exert all forms of abuse and pressure to maintain the status quo.

He added that he appreciates the joint work with the friendly Russian Federation, at all levels, from fighting terrorism to relentlessly pursuing the return of Syrian refugees.

Assistant Minister of Health, Ahmad Khleifawi, pointed out that despite the gravity of the challenges that the war has brought about in Syria over the past years, the economic blockade, and the coercive sanctions, the health sector has managed to remain stable, and Syria still enjoys acceptable health security, a result of the strategy the Ministry of Health adopted and the plans established to maintain public health.